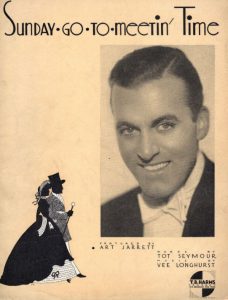 The second article of the “Censored Eleven” series is about the Warner Brothers “Merrie Melodies” cartoon Sunday Go to Meetin’ Time (1936) – a film based around a tune by songwriters Tot Seymour and Vee Lawnhurst (who would go on to pen numerous Fleischer tunes including Hold It, Sally Swing and Christmas Comes But Once A Year – not to mention Abu Ben Boogie from Lantz). In the film Nicodemus, an African American truant from church, has a nightmare about the Devil capturing him and sending him to Hades.

That plot, however, takes up barely half of the film’s length, and the other half consists of songs and sight-gags performed by incidental characters. As an early “Merrie Melodies” episode, this film followed the series formula of exploiting music owned by Warner Brothers; the episode’s four songs (including “You Gotta Give The Devil His Due”, “Save Me Sister” and “I Got Shoes”) heavily pad the cartoon’s length to supplement the very thin story. The setting of a rural, religious African American community on Sunday morning unites both parts of the cartoon, but the parts differ in their depictions of African Americans.

The first half starts with the church’s minister greeting his arrivals in song. Then, a well-dressed couple tap-dances to church while singing the film’s title-song. Despite the exaggerated sizes of the characters’ lips, the singers do not engage in grossly stereotypical behavior. In addition, the songs have good harmonizing, and the tap dance is animated well.

However, that first half also contains ethnic gags, and they likely raised red flags for United Artists when the company chose cartoons to withdraw from television syndication in 1968. The stereotype of African American lethargy appears in multiple scenes here. In between the first two songs, a sleepy African American’s bald head serves as a clapper for the church bell, but his laziness and sleepiness keep him from waking up inside the bell. Then, a cutaway from the tap-dancing shows a shuffling man with shut eyelids. Although he appears to be sleepwalking (or sleep-shuffling),he tips his hat on cue when a woman passes by him. One gag centering on skin color, in which adults rub soot on children and polish them to “clean” them for church, was stolen from Ub Iwerks’s cartoon Little Black Sambo from the previous year.

The second half starts with gags based on more stereotyped behavior. Nicodemus is shooting craps when his wife grabs him by the ear and drags him to church. They are both speaking in minstrel dialect, and Nicodemus sounds like the African American character-actor Stepin Fetchit, who made a career out of the sleepy persona. After a few seconds of the song “All God’s Chillun Got Shoes,” Nicodemus sneaks out and tries to steal chickens. The gambling with dice and the chicken-stealing were hoary ethnic generalizations by 1968.

Then, after a blow to the head, Nicodemus hallucinates about small devils capturing him and taking him to Hell to see the Devil in person. After mentioning “shooting craps” and “stealing chickens” among his captive’s sins, the captor condemns the sinner in song to eternal damnation. But it was only a dream, and Nicodemus races off to the church on his own volition. The congregants are still singing, “All God’s Children,” and this time he joins them.

This cartoon was the first of only three among the Censored Eleven to be reissued as a “Blue Ribbon” release (in 1944). Henry Sampson’s book That’s Enough Folks mentions that one person wrote to an African American newspaper to complain about the film’s re-release during World War II. That person’s complaints fell on deaf ears, and the film stayed in circulation and then moved on to television broadcasts in the 1950s and ’60s. Nevertheless, the cartoon’s handsome animation and harmonious musical numbers could not rescue it from removal in 1968; the ethnic content was too much.