Suppose Goofy Gave a Dance Party – and He Never Showed Up?

In the Goofy tradition, we celebrate April Fool’s Day and Goofy’s birthday– neither of which is today–with his first LP, for which he recorded absolutely nothing. 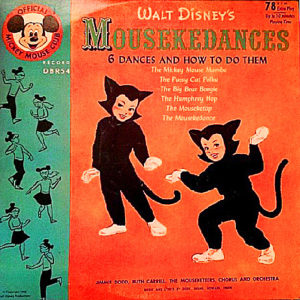 Disneyland Records adopted a dramatic sales and marketing change in 1959. All the more generic, teen and adult-oriented material was moved to the then-new Buena Vista label, making the previously catch-all Disneyland brand completely devoted to kids.

The other big change was economy. The first wave of soundtrack albums was conceived as mainstream movie and show albums, for families but not specifically for kids. The expectation was that retailers would place them alongside Oklahoma! and Singin’ in the Rain, not in the same bins as Raggedy Ann Stories and Mother Goose Favorites. But just as the mainstream image of animated films today is primarily children’s fare, the stores stocked the Disney soundtracks in the children’s section, where they cost twice as much as most other LP’s in the bins.

1959 also saw the Mickey Mouse Club winding down on television with the last Official Mickey Mouse Club album released the previous year. The first compilation album to keep the songs in circulation was DQ-1209, Fun with Music. Other than the album’s title (which was the theme of every Monday afternoon on the TV show) and the telltale presence of Mouseketeer performers, there was no mention of the Mickey Mouse Club anywhere on the package so it could sell as a generic children’s title. The idea worked; the 30-song Fun with Music LP was a consistent seller for over two decades.

Goofy’s Dance Party was the next album in the catalog. Some of the songs originated on the show, like “Sweet Shop Rock” and “The Pussycat Polka.” The “1925 Charleston” came from a Tuesday “Guest Star Day” segment featuring Cliff Edwards; “Meetin’ at the Malt Shop,” sung on the album by Gloria Wood and chorus, was performed by David Stollery and Annette on her MMC serial. One of the songs was created especially for an Official Mickey Mouse Club Records: Darlene Gillespie’s “Valentine Waltz” from Holidays with the Mouseketeers. 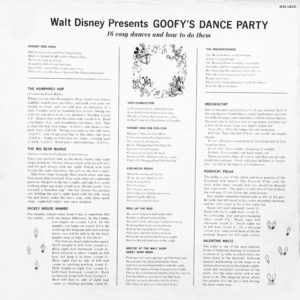 The Shaggy Dog had been a huge hit in theaters the previous March. In an effort to ride the wave of novelty records, the canine lead was given a voice—Paul Frees—and inside the cover of his album, there is a photo of the sheepdog signing a recording contract with Disneyland Records President Jimmy Johnson. The music on the album was graced by spectacular big band arrangement by Camarata. It made perfect sense to kick off the LP with the superb “Shaggy Dog Cha Cha Cha,” followed a few songs later by “Shaggy Dog Shag.”

Two of the songs even had their own choreography, which actually dates back to when they were released as Official Mickey Mouse Club records. Davy Crockett and Beverly Hillbillies star Buddy Ebsen and his sister Vilma worked out “The Big Bear Boogie,” which is about how Crockett learned to dance. (I’d be remiss if I didn’t mention the Sing Before Breakfast sequence in MGM’S Broadway Melody of 1936 – featuring Buddy and Vilma, with Buddy foreshadowing his relationship with Disney by wearing a Mickey Mouse sweater – and singing what would become the future theme song for Tom & Jerry!)

The other specially choreographed tune is “The Humphrey Hop.” It was adapted from song (co-written by none other than Daws Butler!) featured in the 1956 Disney short In the Bag. The dance was by a person who deserves a bit more applause, Burch Mann. She not only choreographed all the dance routines for the first season of the Mickey Mouse Club including all the “themed days” and the live TV opening of Disneyland, she also brought in two of her students to audition, Bonni Lou Kern and Darlene Gillespie. (If it wasn’t for Burch, Darlene might not have recorded solos for the greatest record ever made.)

Yes, there’s a little bit of everything on Goofy’s Dance Party. Except Goofy… and Daisy. They may be on the cover, but they’re not on the record itself. Well, maybe Goofy’s the DJ…

Back in 2012, a proud mom posted this video of her daughter and son dancing to the voice of Paul Frees and the music of Camarata (note the boy’s uncanny imitation of Tutti’s Trumpets) in a charming little school show. You’ve got to commend parents of such exquisite taste who provide their children with the finest in recorded entertainment!