Editors Note: Greg Ehrbar will return next week with his latest Animation Spin column (a pressing deadline prevents his column from appearing this week). In his place, I am filling this space with Mike Lyons tribute to the 40th anniversary of one of my favorite Ralph Bakshi features – one I feel that has been under appreciated, American Pop (1981). This column was posted on my sister blog, Animation Scoop, a few months ago – but I’d love to hear from Cartoon Research readers with their thoughts on this musical epic. – Jerry Beck

Sure, today seemingly anything is possible in animation. Everything from bringing the internet to life as a “living world,” to soaring on the back of a dragon at dizzying heights can and has been realized.

However, even today’s filmmakers with the latest technology at their disposal, would be hard pressed to tackle a subject like, oh, the entire history of pop music in an animated film.

But this didn’t stop director Ralph Bakshi from doing just this with traditional, hand-drawn animation, in his ambitious feature film, American Pop. 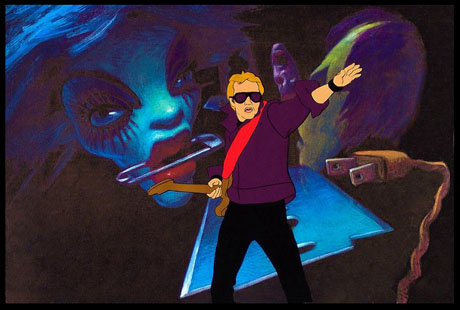 The full-length feature, which was released on February 13th, 1981, celebrates its 40th anniversary this year, starts its story in the late 1890’s and tracks several generations, as it chronicles the inception and emergence of popular music.

American Pop opens like no other animated feature, using newsreel footage and silent movie-like title cards to depict a woman and her son, named Zalmie, escaping Russia, after their village is attacked and burned by Cossacks and the father, a rabbi, is killed.

Zalmie and his mother immigrate to New York City, where young Zalmie gets a job handing out flyers outside a burlesque show in the city. This proves to be Zalmie’s first introduction to music, as he grows up and spends time at the show.

Through the rest of the film, we then follow, Zalmie’s future generations of his family, including his son Bennie, who becomes a jazz pianist during World War II and his stepson Tony, who provides us a glimpse into the emergence of rock and roll (and sadly, subsequent drug addictions).

The story is then finally passed to Pete, in “contemporary times,” who turns his back on drugs, to focus on his music and the film concludes with him performing at a concert, as he successfully launches his career. 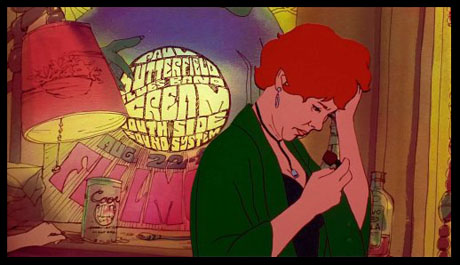 American Pop was a very personal film for Bakshi, as he was born in Palestine and his family eventually came to Brooklyn in New York City. He no doubt sought to create a film told that told the story of a similar American experience, using music as the backdrop for this.

Music, ranging from artists like Louis Prima to Bob Seger, plays across the soundtrack as almost one-hundred years of history pass by.

As he did in The Lord of the Rings, Bakshi uses the process of rotoscoping in the film. In this process, scenes in the film are filmed in live-action, after which animators trace over this footage. Developed by Dave Fleischer (most famous for the classic Popeye cartoon shorts), Rotoscoping helps capture realistic human movement and action.

Rotoscoping is seen as somewhat controversial, as many felt that the “tracing” didn’t necessarily equate with the draftsmanship and acting that one usually associates with an animator. Others argue that its purely a style or technique (similar to today’s motion capture) to bring the animated story to life.

Regardless of what “camp” as an animation enthusiast you may fall into, there’s no denying that Rotoscoping brings to life some very powerful and entertaining sequences in American Pop. 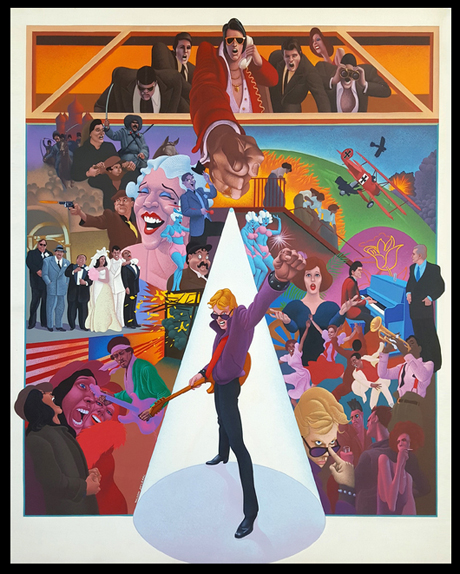 The opening sequence depicting the raid of the Cossacks is shocking and pulls the viewer in immediately. Bennie, while fighting in World War II, coming across a piano and being discovered by a Nazi soldier in a burned-out village, is heartbreaking; a rock group performing Jefferson Airplane’s “Somebody to Love” with news footage of the Vietnam War and rioting, along with psychedelic colors and an LSD trip, perfectly captures the ‘60’s; toward the end of the film, Pete’s drug dealing is set against Pat Benatar’s song “Hell is for Children,” with gritty realism. 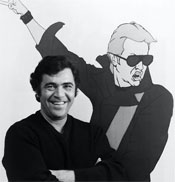 From his debut with daring and landmark early features like the X-rated Fritz the Cat (1972) and Heavy Traffic (1973) to later sci-fi fantasies like Wizards (1977) and Fire & Ice (1983), Bakshi has always “swung for the fences” with his films and American Pop is no different.

In addition to tracing the birth of popular music, it’s subtle and not-so-subtle messages around the importance of generations connecting, creativity and pursuing one’s dreams through any challenge are those that many films today, particularly animated films, don’t explore.

In his 1981 review of American Pop in The New York Times, critic Vincent Canby summed up the film, and Ralph Bakshi perfectly, when he wrote that the director “…continues to push animation techniques to the outer limits more frequently explored by film makers who call themselves Avant Garde, but who seldom are.”

Michael Lyons is a freelance writer, specializing in film, television, and pop culture. In addition to Animation Scoop and Cartoon Research, he has contributed to Remind Magazine, Cinefantastique, Animation World Network and Disney Magazine. He also writes a blog, Screen Saver: A Retro Review of TV Shows and Movies of Yesteryear and his interviews with a number of animation legends have been featured in several volumes of the books, Walt’s People. You can visit Michael’s web site Words From Lyons at: www.wordsfromlyons.com