We have a slight gap here, with no panels for the month of August. Maybe the change in the studio’s name, which finally took effect in the screen credits in Summer 1942, had something to do with it. But somehow I think not…

Actually, many of the earlier Famous cartoons were defacto Fleischer productions (You’re a Sap Mr. Jap, Alona on the Sarong Seas) since they were well into production before the changeover occurred. But then again, I don’t think Max or Dave were even in the building when they were being made, so it’s a moot point.

July 8, 15, and 29, September 23, and October 21 all appear to be Larz Bourne’s work, who signed his name once in last week’s installment. I like his rendition of Superman—super cartoony and certain to infuriate the DC purists. 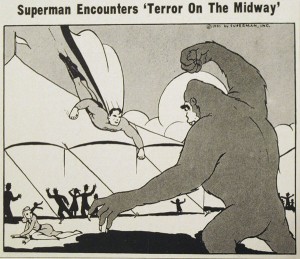 ABOVE: You’re A Sap, Mr. Jap (released August 7th) and BELOW: Japoteurs (released September 18th). Note: neither film is identified as a Fleischer Studios or Famous Studios production.

BELOW: A Hull Of A Mess and Showdown (both released October 16th) were the first Paramount cartoons labeled as “A Famous Studios Production”.