Continuing our exploration of vintage recordings used as soundtrack in classic cartoons of the 1930s, this week we look at two popular performers whose musical abilities fit perfectly with the mindset at Fleischer Studios. 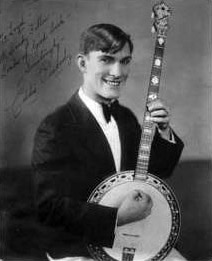 It is interesting to note that, at the Max Fleischer studio, the only ‘needle drop’ artist to show up in two cartoons is Eddie Peabody. And, if the Fleischer folks played their cards right, they could get by with only one record.

It turns out that both “St. Louis Blues” (used in Hot Dog) and “Some of These Days” (in Wise Flies, below, starting at 3:55) were cut the same day – in late October, 1929 – and, on at least two and probably three of the labels on which it appeared, the two sides were coupled. We don’t know about it on Perfect, although it is possible, even likely, that these sides appeared on that label. But those tracks are known to have been coupled on Domino 4438 and on Regal 8887.

Eddie Peabody was a multi-instrumentalist, although he is most intimately associated with the tenor or plectrum banjo. “St Louis Blues” is a banjo solo with piano accompaniment and vocal refrain. Peabody had also recorded the selection for Victor two years earlier, but that version (cut atthe Clift Hotel in San Francisco) was unaccompanied.

“Some Of These Days” was described as a “Mandocello with Banjoline”; again with piano accompaniment and vocal refrain. A “mandocello” was a slightly larger version of a mandolin, designed for mandolin quartets and mandolin orchestras (which were popular on campuses up until the late 1910’s). A “banjoline” is an instrument strung like a mandolin, but built on a banjo body–designed to be louder than a regular mandolin.

Peabody was quite the showman. He recorded a good deal in the 1920’s, cut a few sides in London in 1931 (where he was doing personal appearances), and then cut lots of albums for Dot in the 1950’s.

Have a look at Wise Flies, and take a listen to Peabody’s isolated track from the 1929 Domino release: 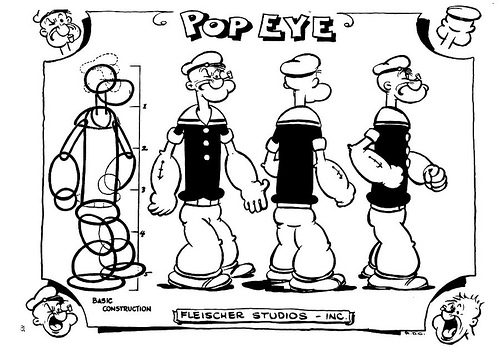 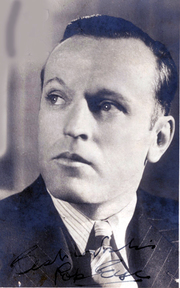 After all, he was the first screen Popeye–even if he wasn’t the first to use a “Popeye voice” in his act. He left the employ of the Max Fleischer studios — allegedly over a matter of money — and he spent much of the later part of the decade in Great Britain, trading off his fame from having been the “original” Popeye.

But it is possible–maybe even likely–that the musical brain trust at the Max Fleischer studios knew of Cosello’s talent at least a year before the first “Popeye” cartoon was released as part of the “Betty Boop Cartoon” series of releases.

During 1931 and 1932, two couplings–four sides–were released on various of the “dime store” labels produced by the American Record Company. All four songs were what the industry would term “evergreens”–songs not of immediately recent parentage that had popularity even after most of their contemporaries had been forgotten.

One of them–“Nobody’s Sweetheart“–was used in the soundtrack of Betty Boop, M.D.. In the course of the record, Sam sings a fleet vocal chorus, and regales us with more than two minutes of “scat” singing, in full voice, mezzo voce, and in falsetto.

It proved to be the perfect soundtrack for surreal animation showing the effects of the “patent medicine”, (which was never patented, and surely was not medicine), Jippo—pronounced “Gyp-po”!

All the issues of this, and the other three sides, appeared under the billing “Red Pepper Sam” (in Europe, sometimes they appeared as by “Red Sam”, without the Pepper!). It would be curious to know how they came to use this record – and whether they found out that Billy Costello was “Red Pepper Sam”.

I believe that he also recorded as “Billy ‘Uke’ Carpenter’ between 1925 and 1931. Early on, he provides ukulele accompaniment, with scat vocalizing as popularized by Cliff Edwards (“Ukulele Ike”), on several Victor records. These are sides by Gene Austin and by Aileen Stanley.

In 1927, he had several vocal records for Columbia. In 1930 and 1931, he recorded several vocals for Harmony, Velvet Tone and Clarion–the budget labels of Columbia records. Songs included “Never Swat A Fly”, “My Baby Just Cares For Me”, “When I Take My Sugar To Tea”, “Without That Gal” and “It Looks Like Susie”. I have the last two myself on 78.

“Carpenter” also recorded for Crown, a label whose product offered “Two Hits For Two Bits”. The material was a mix of current pops and “evergreens” such as “St. Louis Blues”.

And, let us not forget, he cut two sides at around the time he ceased dong “Popeye” cartoons, also for the “dime store” labels of the American Record Company. I suspect that the orchestra behind him on these two sides was led by house – bandleader Russ Morgan – who may be playing the trombone passages.

Also, the “Popeye” voice must have been rough on Costello–he can be heard clearing his throat during the first instrumental passage on “I’m Popeye The Sailor Man”.

As long as we are discussing Billy Costello, I guess I should say a word or two about the recording career of other folks who also contributed (intentionally or not) to the voice-that-would-be Popeye. For instance: Floyd Buckley. It should noted that all four of the sides that Buckley cut for Bluebird are on You Tube for reference. Buckley was the radio “Popeye” and did record one cartoon, Be Kind To ‘Aminals.

The earliest “Popeye”-type voice I’ve found on record belongs to ‘Gene Greene (The apostrophe was his by choice). On two versions of “From Here to Shanghai” (an Irving Berlin throwaway from 1917), Greene scats in a buzzy “Popeye” voice, before going into what can only be called “eefin'”.

It is said that Greene preserved something of the style of Ben Harney, a Black singer-composer who was active in the 1890’s, but never got the chance to make records. Greene’s two versions were one for Victor (assisted by the Peerless Quartet) and one for Little Wonder.

Another early exponent of this type of vocal effect was “Poley” McClintock, who was drummer with (Fred) Waring’s Pennsylvanans, a popular stage attraction and recording artist. The band made at least one Vitaphone short, which may demonstrate them in their on-stage element. But they made many records between 1923 and 1933. Hear his “Popeye” (starting at 1:50) in embed below. McClintock was still with them in 1941, when Waring resumed recording (for Decca). In the meantime, Waring did many radio broadcasts, and it’s possible that McClintock was heard on them, too.

Next Week: Versions of a Cuban song get into two cartoons from two entirely different studios.