Mighty Mouse on the New Rochelle Walk Of Fame 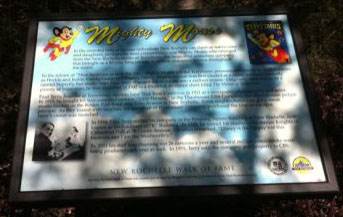 What do Alex Raymond, Carl Reiner, Jay Leno, Buffalo Bob Smith, Walter Lantz and Paul Terry have in common? Nothing – except they are all honorees of a plaque on the New Rochelle Walk of Fame. On Saturday, April 27th 2013, seven new notables were inducted into the Walk of Fame. The ceremony was held as part of the celebration of the 325th Anniversary of the founding of the city in Westchester County N.Y.

The New Rochelle Walk of Fame is located on the Library Green located at the town’s Public Library, 1 Library Plaza in downtown New Rochelle. The other 2013 inductees included cartoonist Neil Brinkley; author E.L Doctorow; actor and director Rob Reiner; and animator Paul Terry and his anthropomorphic superhero Mighty Mouse. I’m sorry that the image of the plaque above is unreadable. If any of our New York area readers can get us a better photo (and the Walter Lantz one), we’d appreciate it.

Mighty Mouse, cartoon hero, and Paul Terry, animator. Terry established the Terrytoons animation studio is what is now the Kaufman Building in 1939. In addition to Mighty Mouse, the studio created other famous characters including Heckle and Jeckle, Gandy Goose and Deputy Dawg.

Interesting to note that Walter Lantz received this honor years before Terry (Lantz was born in New Rochelle). Terry established his studio in New Rochelle in the 1930s and there it lasted until the early 1970s – almost 50 years. The town has paid tribute to the Terrytoon studio several times over the past 40 years. This time its permanent.

Here is the video of the April 27th ceremony:

Here’s a 1951 photograph of some of the employees in the New Rochelle facility – the Terrytoon chorus heard in almost every cartoon of that era, about to record a track… perhaps for an Aesop’s Fable cartoon like Happy Valley (1952), embed below. 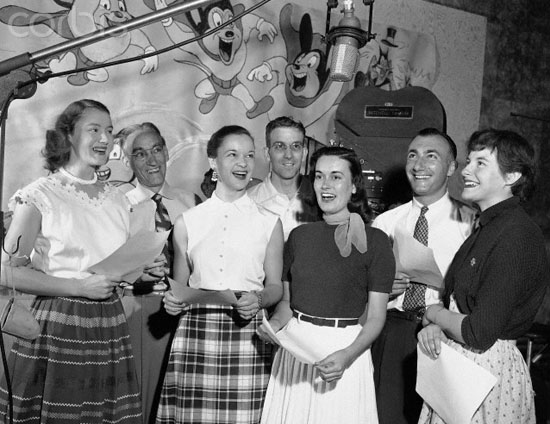