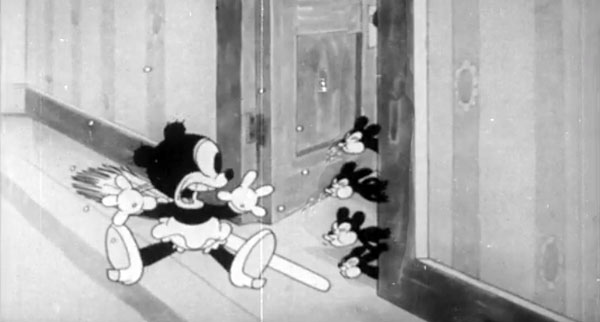 It’s a short one today, but a fun short! 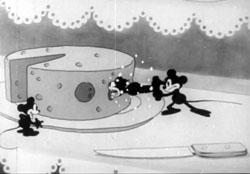 The Harman / Ising Studio produced three ‘Cubby Bear’ cartoons for Van Beuren in 1933. Two of the three, ‘’Cubby World Flight’ and Gay Gaucho’ saw theatrical release, and the third didn’t. It’s unclear why this happened, but what is interesting is that Hugh Harman productions released what appears to be a work print of the film in the late 40s, using soundtrack music from their recent Easy Does It industrial film, Judging from the 16mm prints that survive, It appears that they either licensed the short to ‘Radiovision’ or that Hugh Harman Productions *was* Radiovision. There is one other ‘Radiovision’ short as far as I know, and that’s a short called ‘Aladdin’s Vamp’- a pilot film made in 1926 for a proposed Arabian Nights series. It was animated by Hugh Harman, Rudiy Ising, Ham Hamilton and Ub Iwerks. Had Hugh Harman not released these two films many yeas after they were made, it’s unclear whether they would have survived. 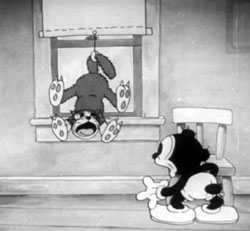 The film itself shares is up to the usual quality of other Harman/Ising shorts of the time; it’s nicely animated with excellent backgrounds. One is left to wonder how it came to be that this clearly complete short was never released by RKO. Was it the cancellation of the Cubby Bear/ Aesop’s Fables series? Did Van Beuren hire Haman / Ising to keep up the schedule while they ramped up to produce the new Rainbow Parade shorts? We may never know…

This particular work print had markings for sound effects. Watch for them as the film runs. Most of these are just an x or a letter, but one says ‘Plop’ when the cat is set down. Funny enough, Harman didn’t add any sound effects to this release.

I first got a print of this film in the early 80s, when buying a big package of cartoons from Frank Bueno. I still have a few prints of it myself, and have borrowed some more to use on the new ‘Cubby Bear’ Blu-ray in progress at Thunderbean. We’ll be working on combining these various copies and cleaning up a final version for the DVD. Here’s one of the raw transfers of the title.