Of these well-remembered pop-themed Saturday Morning H-B series, only one resulted in a commercially released soundtrack album. Which one, and why? 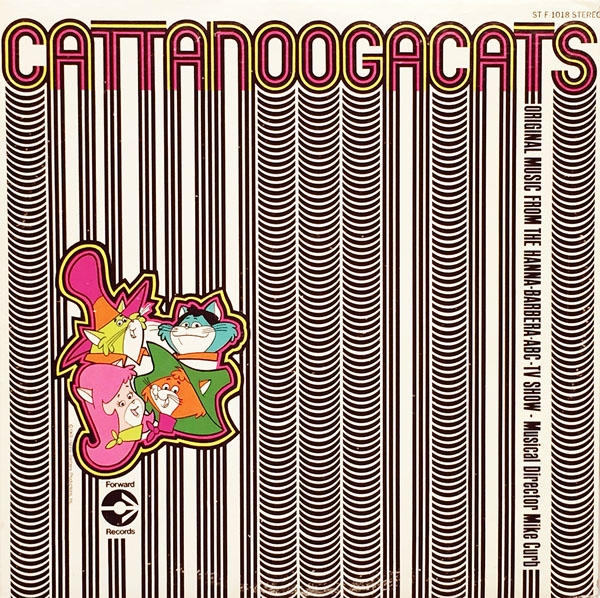 Songs: (Click each title to hear) “Cattanooga Cats Theme”, “Mother May I”, “How Did I Ever Get So Lucky?”, “Wait a Minute for Country”, “My Group Has Too Many Cavities”, “Alle Alle Oxen Free”, “Country Carnival”, “Johnny Johnny Jump Up”, “My Girlfriend is a Witch”, “My Birthday Suit”, “Merry Go ‘Round”.

Cattanooga Cats was an interesting hybrid of Hanna-Barbera’s early “package” shows, in which three or more cartoons combined into one program, named for the “host” character in the first cartoon (Huckleberry Hound, Magilla Gorilla, Atom Ant); the hour format of the previous year’s The Banana Splits; and the unbridled success of Filmation’s The Archie Show, both as Saturday morning competition and the opportunity for hit records.

H-B never launched an animated band as successful or influential as The Archies, though their Josie and the Pussycats (itself an Archie comics franchise) is arguably the runner up. ABC also wanted a share of the Archie formula. Put it all together with some of the most interesting pop-art graphics to come from 3400 Cahuenga Blvd (plus a good dose of Laugh-In grooviness) and you have Cattanooga Cats.

The hour featured the band in cartoons, short segments and song sequences, plus three other cartoons: “Around the World in 79 Days”, “Motormouse and Autocat” and the most memorable one, “It’s the Wolf”—changing the Hanna-Barbera staple of cats and mice to a wolf and sheep, each delightfully voiced by Daws Butler and Paul Lynde, respectively. 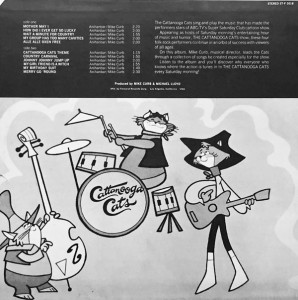 Musically, H-B turned to influential music entrepreneur Mike Curb, who among other things, led a vocal group The Mike Curb Congregation that performed independently (“Burning Bridges”, “Sweet Gingerbread Man”) and as back up for singing stars like Sammy Davis, Jr. (“The Candy Man”) and presided over MGM Records, later going into politics and becoming Lieutenant Governor of California.

Curb brought in composer/producer/singer Michael Lloyd, whom he had made VP of Artists & Repertoire at MGM Records. Lloyd had a vast musical resume for film, TV and records before and after Cattanooga Cats, and was contributed to Saturday morning music through the Krofft series Far Out Space Nuts and The Lost Saucer.

There is a distinctive style to the Cattanooga Cats’ songs—a modest, simple quasi-garage band style (with the exception of “Merry Go-Round”, as mentioned below). Almost every song on the album starts with a swift drumbeat and continues in a pulsing rhythm (perhaps to assist in animation timing and production efficiency). There is a juvenile angle to the music and the lyrics overall, though there is one exception.

That would be My Birthday Suit, a spritely little dance tune about a happy naked lady. Even though Hanna-Barbera’s visualization of the song aimed the meaning at a literal birthday party, there are no two ways about it.

It’s a song Doctor Demento would have—or probably did—play on his radio show. As a matter of fact, the song did receive local novelty hit status in 1984, when rock station South Florida WSHE pretended it was a “secret” record by Vanessa Williams, who was at the center of controversy when nude photos of her resurfaced.

Hanna-Barbera solved the “Birthday Suit” connotations by depicting the Cattanooga Cats and small children. If toddler Shirley Temple could be seen doing the hula topless, why couldn’t Kitty Jo? Pressure groups were descending on Saturday morning in the late ’60s, yet there’s been no talk of a Cattanooga Cats Controversy.

H-B, Curb and Lloyd must have been counting on chart success for the music. This album offers only eleven songs, leaving a hefty handful for at least one more LP had the concept taken off. It did not, but what’s left is an entertaining piece of cartoon bubblegum with its own specific voice and far-out grooviness.

GIVE A LITTLE LISTEN
“Merry Go-Round”
This song stands out among the others on the album for several reasons. The orchestration is richer, including strings, brass and woodwinds (and a slightly more Hanna-Barbera-ish sound). The vocals are unlike those on the other tracks. And most strikingly of all, this is a very touching, melancholy song about growing up and wistfully longing for the past. Despite it’s bouncy rhythm, the arrangement packs a dramatic punch, especially during the lyrics “Soon enough will come December/And then you shall remember”.

For the animated version of “Merry Go-Round”, Hanna-Barbera used some interesting designs. It can even be surmised that the visuals do indeed support the moody lyrics. Note that, while there’s an overall emphasis on the usual frolic, there are virtually no shots of the Cats during the darker lyrics. Instead, there are obscuring clouds, then a full moon, and a close up of a horse’s eye. Maybe that’s over analyzing. It’s not an Ingmar Bergman film. Still, any number of images could have been chosen over these. Specific discussions must have taken place about the visual treatment of these songs, as opposed to, say, “Alle Alle Oxen Free”, which consists of little more than graphics and color patterns. 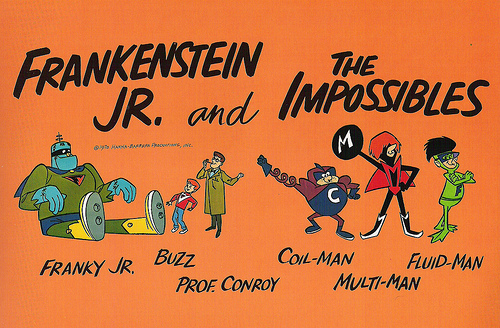 Frankenstein Jr. and The Impossibles came to TV just as Hanna-Barbera’s short-lived but long-cherished record label was winding down. The series combined the Johnny Socko-like adventures of a kid genius and his giant robot with the misadventures of a rock band that doubled as a super hero team.

The music for The Impossibles was cut from the same cloth as “The Hanna-Barbera Singers” heard on the HBR “Cartoon Series” records and The Way-Outs on The Flintstones, very likely recorded during the same time period with studio musician/vocalists that included Ron Hicklin, Al Capps and Stan Farber.

The Beatles had only become a worldwide phenomenon two years before, The Monkees were just starting to ascend and The Archies were two years away. Nobody knew what would hit big, so The Impossibles must have seemed to have as good a chance to top the TV ratings and music charts as any. But unlike Cattanooga Cats, The Impossibles did not have a music business mogul like Mike Curb championing it. While that never happened anywhere but in a parallel universe, this would be far from Hanna-Barbera’s last attempt.

This ten-inch test pressing serves as evidence that the TV soundtrack album of The Impossibles was planned, especially since the disc has the HBR label. Whether or not the other songs were pressed, I cannot say, but perhaps this was also used to attract another label to release the songs. (click thumbnails to enlarge) 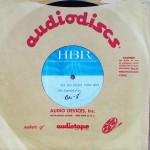 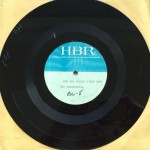 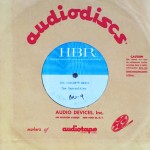