Continuing on to the eleventh part of my checklist of French animated features, we continue this week with a look at the releases in 2008 and 2009 – with films by such diverse talents as Luc Besson and Stéphane Aubier.

Stassen founded nWave Pictures in Brussels, Belgium in 1994, but it specialized in amusement park animation and IMAX specials for its first dozen years. In 2006 nWave began producing French-language theatrical features for distribution in Belgium, France, and the French-speaking parts of Switzerland, and for foreign sales; all directed by Stassen, sometimes co-directed by others. nWave’s productions are designed for the general family/children’s market. Although they have been released theatrically in French, all have had English-language titles and theatrical posters. nWave has publicized Fly Me to the Moon, about Nat, IQ, and Scooter, three anthropomorphized housefly astronauts who meet Buzz Aldrin and help the American space program beat the Soviets to the Moon, as the world’s first theatrical feature designed for and released only in 3D.

15-year-old Max (a funny animal so generic that you have to study him for several minutes to guess whether he’s a mouse or dog or what) goes to the Fly Swatter Festival in Saint-Hilare, looking for his father, the missing folk singer Johnny Bigoude. He finds that the Festival and the city are run by the capitalist Rodolfo and his Bzzz & Co. fly-swatter company. Rodolfo’s daughter Felicie persuades him to hire Max, a young virtuoso. But when Max and Felicie learn too much about Rodolfo’s secret plans, they must escape him.

Max & Co was a stop-motion Swiss-French-Belgian co-production, mainly Swiss, with a thinly-anthropomorphized animal cast. It premiered at the 2007 Annecy International Animated Film Festival on June 11, 2007, eight months before its French and international release, winning the 2007 Annecy Audience Award. It was the most expensive Swiss film of its time, with CHF €1.5 million of its CHF €30 million budget provided by the Swiss Federal Office of Culture. But despite its prestige and awards, its heavy-handed anti-capitalist pro-ecological message made it a commercial failure upon its general release. In August 2008, its production companies filed for bankruptcy.

Spike, Santa Claus’ newest elf helper, loses the mailbag of letters from children when it is mistaken by penguins in Ping Ville for a bag of money and locked in their bank vault. Spike, with Raymond, an elf friend, and Paco, the only penguin who believes him, have to burgle the bank at night to get the bag back. They are hindered by two polar bear robbers picking that same night to rob the bank. The directors’ Toulouse CGI studio, TAT Productions (for Jean-François Tosti, David Alaux, and Éric Tosti), also made (1) a 35-minute Spike 2008 Christmas TV Special condensation; (2) The World of Santa Claus, 24 1-minute TV CGI shorts with the Spike characters; and (3) a second 35-minute Spike 2 TV Special sequel (December 25, 2012), in which Spike, Paco, and Spike’s cousin Dorothy pursue Tony, one of the polar bear robbers, who has kidnapped Santa’s flying reindeer. There is also a 71-minute DVD release of the Spike 1 and 2 TV Specials together.

Mia is a motherless 8-year-old girl whose father, Pedro, is one of the workers at a remote Latin American construction site, clearing the jungle to build a resort hotel. A mysterious disaster traps him underground. Mia sets out to rescue him, and has many adventures in the tropical paradise before meeting the friendly giant Migoos. An international film festival favorite, produced by Girerd at his Folimage studio, winner of the Best Animated Feature at the 22nd European Film Awards.

An animated extremely-loose expansion of the Puss in Boots folk tale as immortalized by Charles Perrault. A tavern dancer performs a sultry version of the theme song from Bizet’s Carmen, not written until almost 200 years later. The American direct-to-DVD release, starring William Shatner as Puss, came after DreamWorks’ 2011 feature, leading most Americans to dismiss it as a mockbuster ripoff of DreamWorks’ Puss in Boots. Almost universally reviled by the public, for both the poor French animation quality (the pretty good CGI does not overcome the silly plot, bad direction, and unfortunate character designs) and the horrible English-language voice dubbing.

A co-production of Belgium, France, and Luxumbourg, based on the 2000 Belgian stop-motion 5-minute TV series. Widely reviewed as a surrealistic Toy Story and compared to the animation of Terry Gilliam. This premiered at the 2009 Cannes Film Festival, and was the first stop-motion film shown there. Cowboy, Horse, and Indian share a house in a town of plastic toys. Cowboy and Indian plan to build a barbecue for Horse’s birthday, but they accidently order 50,000,000 bricks instead of only fifty. A summary in The Guardian is, “construction work begins, but the resulting walls are stolen by sea monsters, who have to be pursued to their oceanic lair, a mission that badly disrupts Horse’s piano lessons.” Wikipedia says that the error “sets off a chain of events as the trio travel to the center of the earth, trek across frozen tundra and discover a parallel underwater universe of pointy-headed (and dishonest) creatures.” Panique au Village deliberately contrasts the cheapness of its plastic toys with the CGI of Pixar, playing up its relation with other works of “cheap animation” such as South Park. Shown at international film festivals from 2009 to 2011, and winner of several prizes. It was theatrically released in the U.S. as A Town Called Panic by Zeitgeist Films in December 2009. 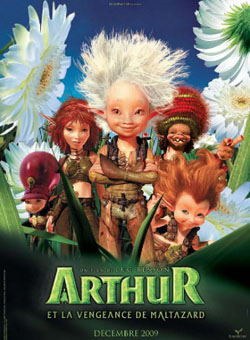 Three years later (1963), Arthur Montgomery is excited to be returning to the land of the Minamoys, with the Bogo Matassala’s help. In the Minamoy village, a big banquet is prepared for his return. But on the eve of his return, a spider brings him a grain of rice with a call for help from Sélénia. Arthur and the Bogo Matassala try to rush his reshrinking, which drops him onto the Koolamassai Max’s bar. (The Koolamassai are similar to the Minamoys but are reluctant allies of Maltazard.) The two have adventures fighting a new villain, Krob of the Seven Kingdoms, and rescuing Bétamèche. He brings Arthur to the Minamoy’s Emperor Sifrat XVI, who tells him that Sélénia has just been kidnapped by Maltazard – but they didn’t send him the message. It turns out to have been a trick by Maltazard, who has decided to conquer the human world. He has studied the process used to re-shrink Arthur and reverses it upon himself, destroying it. This leaves Maltazard seven feet tall and Arthur trapped at two inches tall, as the feature ends.

Arthur et la Vengeance de Maltazard was released as Arthur 2: The Revenge of Maltazard as an American DVD. Due to the American theatrical failure of the first movie, it was a theatrical release in Europe (Arthur and the Great Adventure was the British title) but a direct-to-DVD release in America. Freddie Highmore and Mia Farrow reprised their live-action roles, but cheaper voices replaced the big-name voice actors.

It received almost all negative reviews in America. The critics complained about its lack of imagination as a standard children’s sword-&-sorcery adventure, and turning Princess Sélénia from a strong woman into a weak heroine who must be rescued. People who bought the DVD complained about the cliffhanger ending. In March 2011, after the appearance of the third movie in Europe, 20th Century Fox released a single DVD of both the second and third movies as Arthur and the Invisibles 2+3: The New Minamoy Adventures.

A French-Italian co-production, for ages 3-up. Almost-seven Nathaniel, nicknamed Kérity, and his older sister Angelica are taken by their parents to spend summer vacation in a seaside villa that they have just inherited from recently-deceased old Aunt Eleanor. She has left her house to the parents, a doll to Angelica, and her vast library to Nathaniel; who considers the old books worthless because he can’t read yet. But he discovers that these are “the original” books, and at night the characters in them come to miniature life: Alice in Wonderland, Captain Hook, the boy-eating Ogre, and all the other characters of children’s literature. However, they can only live as long as they stay in Aunt Eleanor’s house; and despite the fact that they were willed to him, Nathaniel’s parents decide to sell them to a used-book dealer. Before he can object, he is shrunken to the characters’ miniature size by the evil fairy Carabosse. Nathaniel and his friends like Alice have adventures fighting the villains of children’s fantasy, plus the seaside crabs that now loom over them, before the books are rescued.

Kérity, la Maison des Contes was produced with separate French and English sound tracks; the American version was titled Eleanor’s Secret. It was an international festival favorite, winning a Special Distinction award at the 2010 Annecy International Animated Film Festival. It was not generally released in the U.S., but Eleanor’s Secret was made available on December 10, 2010 for bookings upon request.