Welcome to week three of Paramount Sales News. Either the first June 1934 issue was missing, or they didn’t print one this week, but we’ve got another fine assortment of Hal Seeger cartooning.

In this installment, Betty and Popeye begin to regularly appear in the same panels, an example of when “crossover” didn’t mean lawyers and fees. May 23rd’s seems to anticipate July’s release of Betty Boop’s Life Guard, just as last week’s had the kids from Strong to the Finich. There will be more direct tie-ins in future entries.

We also have two panels (May 2nd and June 23rd) drawn by Elzie Segar, Popeye’s creator. I know the first has seen print many times but I hadn’t seen the second before. Note the shout-out to George Schaefer, future president of RKO (and casualty of Orson Welles), who was at Paramount at the time. 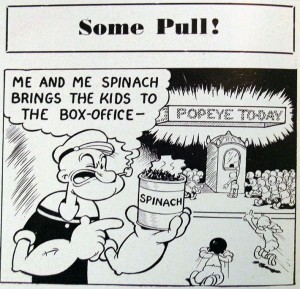 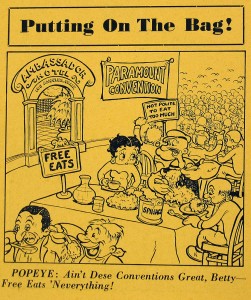 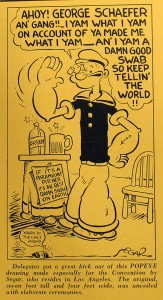 Here’s a sample of what the salesmen were peddling at the time these promotional pieces above appeared in print.