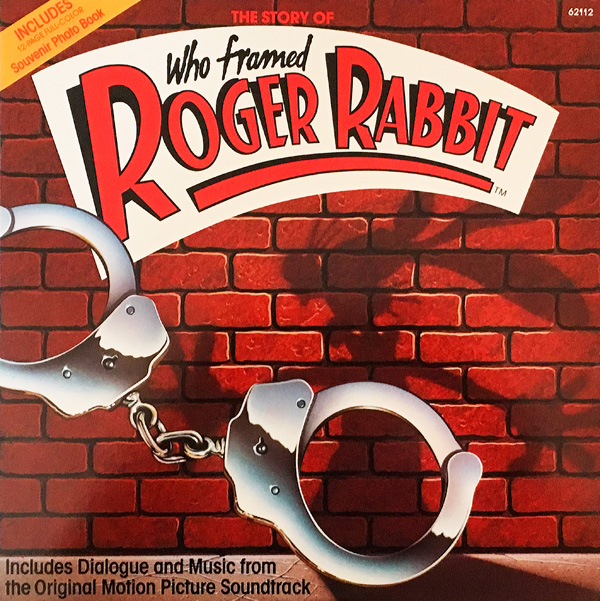 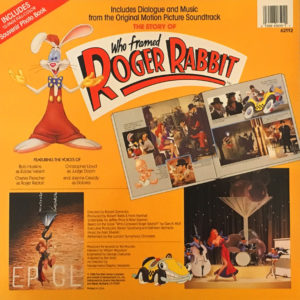 Who Framed Roger Rabbit was the movie that changed everything. Suddenly the less enlightened folks in the world finally knew what we knew—that cartoons were cool—or at least they were more inclined to agree that they were. Steven Spielberg said so, after all. Animation was not disposable dross, not baby stuff, but was instead a funny and/or fantastic art form now solidified into the cinematic firmament. Seeing that final sequence in the film–with all those classic characters from so many different animation studios together on the movie screen singing together–was in itself a monumental experience.

A movie such as this, combining live action and animation from beginning to end (uncommon to sustain for an entire feature at the time) has an inherent duality. 30 years later it can still astound for its spectacular artistry and the inventive way it exploits its techniques while making the audience forget about them.

The duality extends to Roger himself. He’s inspired by the irreverent, insane world of Warner Brothers and Tex Avery cartoons, yet touched with the vulnerability of a Disney character. Along the same lines, the story is a gritty film noir whodunit, but served up like a Technicolor ice cream sundae.

The film was a smash financially and overwhelmingly impressed most critics. It won six Oscars plus a special award for animation director Richard Williams. There was so much tie-in merchandise during the initial release, an entire floor of New York’s Macy’s department store was devoted to Roger Rabbit stuff. But when the smoke cleared and the premiere excitement died down, the merchandise apparently didn’t connect with the public as did the same way as the film. Perhaps its duality worked against the merchandise. It was a film with a largely adult sensibility. While it also certainly appealed to kids, and still does, that didn’t necessarily translate into toys, games, books and plush. The situation was reminiscent of Warner’s sophisticated 1962 animated feature, Gay Purr-ee (see this Spin) which was also a case of a studio “wanting their cake and eat it too” by producing children’s merchandise for a property that just doesn’t allow for it.

Who Framed Roger Rabbit was released under the Touchstone banner rather than Disney name because of its more grownup edge. For Disney’s record division, the Roger Rabbit the Storyteller album fell under Buena Vista. To keep it looking less like a children’s album, Roger and the other characters do not appear on the cover—instead a large pair of handcuffs are presented as a more graphic approach.

In a sense, the record company was doing what its original staff had done, rather unsuccessfully, back its early days with its classic soundtracks: using less juvenile cover art de-emphasizing characters in hopes of capturing a more sophisticated market. If the numerous unsold remaining copies of this album in stores was any indication, the path once again had led to the same end.

The recording itself, narrated by William Woodson (TV’s Super Friends, The Invaders, The Odd Couple), is an excellent keepsake of the film’s dialogue, as the key scenes are all included with the original soundtrack (minus the economically unfeasible cameos from famous cartoon characters, which wouldn’t have worked well in audio anyway). Alan Silvestri’s Saturn Award-winning score is heard throughout, as well as a snippet of Roger singing “Merry-Go-Round Broke Down.”

GIVE A LITTLE LISTEN
“Who Framed Roger Rabbit” Storyteller

Note that the famously deleted “pig head scene” is still included on the album. Adaptations in book and audio form are made in advance, so the scene must have been in the script and edit materials when this record was made and before the final cut. 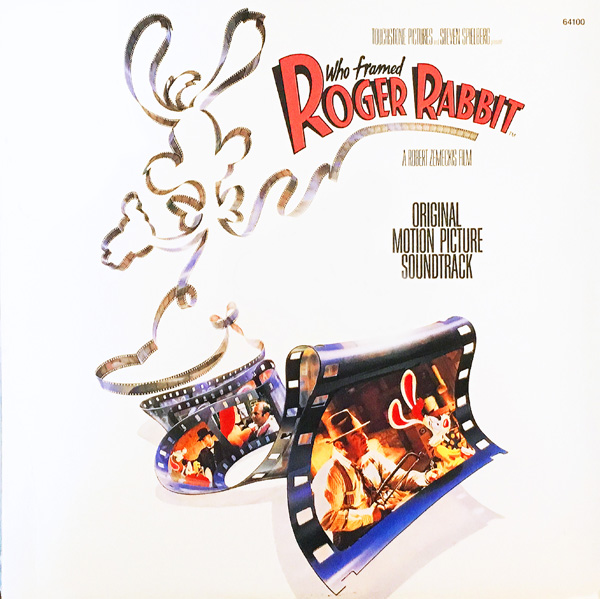 This was the only vinyl album from “Touchstone Records,” though it falls within the catalog numbering system of Buena Vista Records. Since it was a more conventional music soundtrack rather than a story album, it enjoyed multiple successes—and indeed was reissued under the Walt Disney Records banner, as times had changed a dozen years after its first release.

The first LP issue inclues vocals by Amy Irving (singing the Peggy Lee hit “Why Don’t You Do Right?”) for Jessica Rabbit and Charles Fleischer as Roger, as well as some nice bits of dialogue from Mel Blanc and Tony Anselmo in the landmark piano duet between Daffy Duck and Donald Duck. Blanc closes out side two (before the end title) with Porky Pig saying, “That’s all, folks!” It marks Mel Blanc’s sole appearance for Disney’s record company.

The big news for fans of Roger Rabbit and composers Alan Silvestri and Bruce Broughton this year is Intrada’s two-disc set of the extended soundtrack. It’s a massive collection (for completists, though, Bob Hoskins’ odd reprise of “Merry-Go-Round Broke Down” is not included, likely for contractual reasons). This is a limited edition, which means that it could possibly become pricey on the secondhand market once is sells out.

Among the new treasures are James Horner’s delightful score for the 1989 Roger Rabbit short Tummy Trouble and Bruce Broughton’s scores for 1990’s Roller Coaster Rabbit and 1993’s Trail Mix-Up. Not only do these three complete mini-masterpieces pay homage to the classic Stalling/Franklyn scores, they also make one yearn for more albums filled with soundtrack scores from the animated series that Spielberg brought to TV like Tiny Toon Adventures and Animaniacs.

Now part of the National Film Registry, Who Framed Roger Rabbit was one of those rare films that was recognized from the start as a groundbreaking work. It played a pivotal role in drawing attention to the importance of great animation and to the classic characters to those who might not have known about them and to reaffirm the relationships with those who never forgot them. Thirty years later, it’s nice to have so much more of the music to enjoy.

Unlike the Storyteller album described at the start of this article, this read-along book and tape set (available only on cassette as the seven-inch records had been phased out) was produced for children, since it helped teach little ones how to read. For that reason, the beverage that makes Roger blast like a steam whistle is soda rather than liquor. Also interesting to note is Roger’s repeated references to Jessica as “Jessie,” which was not the case in the movie. Charles Fleischer does an admirable job with the difficult task of keeping the character voice consistent yet varied for the full length of the storybook, which incidentally also includes the deleted pig head scene.