Cartoons Considered For An Academy Award – 1961 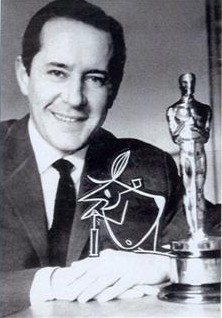 The year was 1961 and the nominees were:

I have no doubt the Academy’s Shorts branch picked what they thought were the best Hollywood studio cartoon shorts – along with one superior foreign short – from a very weak batch of submissions (see below). Zagreb had emerged. Hollywood was not completely defeated – but the POV of the committee members had changed. The Academy was now cut loose from its Hollywood masters (at least as far as the cartoon short committee was concerned), and the artists have won. Creativity, aesthetics, ingenuity would trump simply awarding a beloved local studio or a popular character. There was no turning back. Ersatz would be the first of dozens of foreign winners to come – with no Hollywood strings attached.

You can watch Glynis Johns and George Hamilton present the award for Ersatz to Zagreb executive Vlado Teresak, here:

However – submitted, screened, but NOT nominated were: 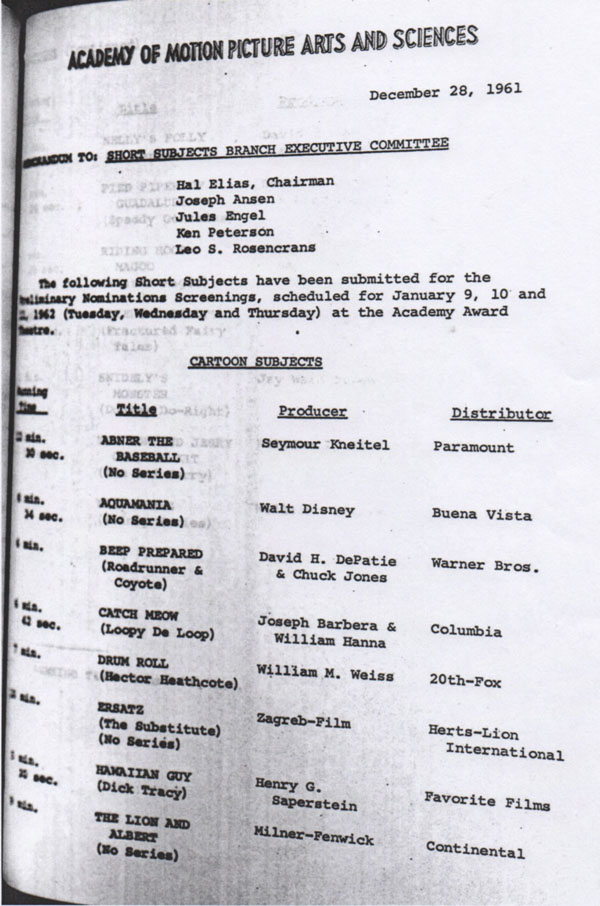 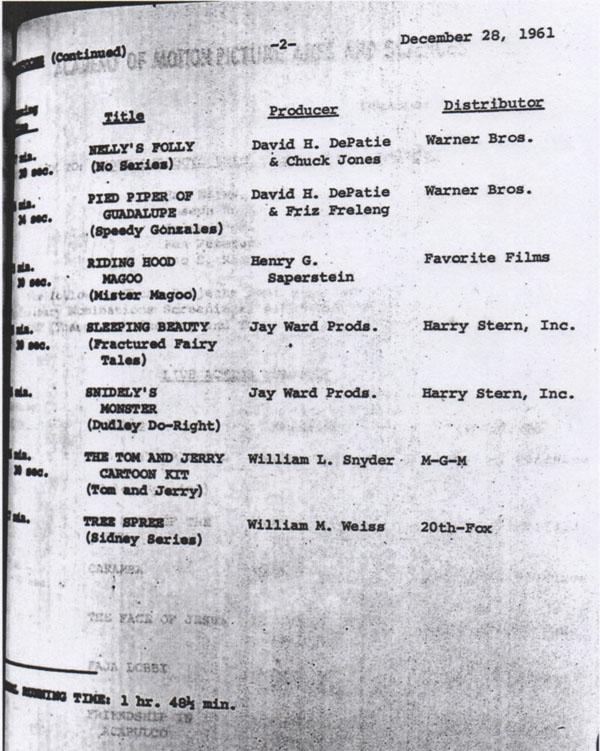 And so we continue our research into what other cartoons were submitted to the Academy for Oscar consideration but failed to make the cut.

Hoo-boy! I think this may be the sorriest set of submissions from any year – then again, who knows what next year will bring? Theatricals that might as well have been TV cartoons – Loopy DeLoop, Silly Sidney, a Deitch Tom & Jerry, Hector Heathcote, Abner The Baseball – and a set of actual made-for-television material – including Dudley Do-Right, a TV Magoo, a Fractured Fairy Tale and a Dick Tracy cartoon. Regular attendees like Ward Kimball, Jules Engel and Chuck Jones must have pulled their hair out. The rule against nominating TV productions didn’t exist before 1972 (the year Richard Williams TV Special A Christmas Carol won). It’s hard to believe that rule wasn’t drafted on January 11th, 1962 (the day after these screenings).

With these posts we ask that you put yourself in their place – which films would you have nominated? Which cartoon should have won? For your edification and viewing pleasure, here are the cartoons that didn’t make the cut. Enjoy the show (and don’t say I didn’t warn you)!

The original recording was released as a single in 1958.

The biggest addition to the pared-down crew at New York’s Paramount Animation Studio was the addition of comedian, voice man and writer Eddie Lawrence. Apparently Lawrence’s Old Philosopher monologue was a huge hit with Seymour Kneitel (Full Disclosure: I too am a big fan of Eddie Lawrence). Lawrence began showing up in the Paramount cartoons last season and was a natural fit.

Kneitel invited Lawrence to contribute stories and write scripts, adapting several of his comedy routines and vocal characterizations to animation. Two characters he had developed on his comedy records were “Percy” and “Ralph” (two years later these characters would become known as Swifty and Shorty). Kneitel’s biggest coup at this time was getting Paramount to buy the screen rights to Lawrence’s 1958 recording Abner The Baseball – and adapting it (via Irv Spector) to a double length cartoon “special”.

As a recoding, it’s hilarious – and very topical (and perhaps now a bit ‘dated’). When you listen, you can’t help but be amused at Lawrence’s New Yorker voice characterization, and visualizing in your mind how crazy this is – getting into the mind of a baseball. As a film, it falls flat. Nothing much was done to “open up” this material. You are just watching an illustrated version of the monologue. Unfortunately, it probably bored the Academy’s nominating committee to tears.

Once again, Loopy DeLoop tries to prove he’s not a bad guy – this time by attempting to negotiate peace between a cat and a mouse. Loopy gets clubbed with a pot and a bat, hit with a rock and – by way of a prop all bonafide cartoon cats and mice must carry – is blown-up with a stick of dynamite. Eventually, on their own the cat and mouse try being friends – and after a week get bored with this so-called “friendship”. So Loopy, once again, comes to their aid by making them enemies again. There – saved you six minutes. Tony Bendict contributes a few witty lines – but visually there is nothing here. Not Nominated.

Hector Heathcote – described here as “a clumsy, awkward patriot” – is the anxious drummer of an Army company trying to spy on the enemy camp. The commander gets an idea to hide the accident-prone Heathcote inside his drum and roll it (hence the title), Trojan Horse style, behind enemy lines and into the Redcoat’s fort. Hilarity ensues… NOT! I actually like these Hector Heathcote cartoons… but, as the cliche goes: if you’ve seen one, you’ve seen them all.

Okay, I confess – These Dick Tracy cartoons are a guilty pleasure of mine. I grew up watching these and have many fond memories of them. That said… I can’t believe UPA submitted one of these to the Academy. Oh, how the mighty had fallen. UPA was now just a shadow of where it had been five short years ago.

On the plus side, Everett Sloan (of Welles’ Mercury Theatre) voices Dick Tracy, “Uncle Johnny” Coons is Stooge Villa and Benny Rubin voices Joe Jitsu, an unfortunate stereotype among Tracy’s diverse police force (which included British bobby Hemlock Holmes (a dog!), Hispanic detective Go Go Gomez and the overweight Irish cop Heap O’Calorie). Joe flies out to Hawaii to follow up on a report of two crooks who attempted to steal the jewel off Diamond Head. He uses his skills of vocal impersonation to trick the bad guys. Click the title card below to watch the cartoon on You Tube – if you dare. 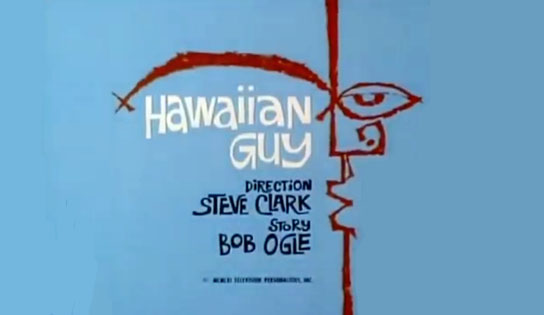 Another submitted cartoon that has vanished off the face of the Earth (though I’m hoping a reader will either upload it or point us towards a viewing copy). The New York Times posted this blurb about the short on April 2nd, 1961 which gives much of the details:

“Tomorrow a one-reel cartoon titled “The Lion and Albert” will have its local premiere at the Baronet Theatre, as a supplementary attraction to “Saturday Night and Sunday Morning” and thereby hangs a small tale. “Lion” marks the invasion of the theatrical field of Milner-Fenwick, a Baltimore organization that has been producing documentary and industrial short subjects.

Produced and directed by Bob Fenwick with Erwin Milner serving as executive producer, the cartoon is narrated by none other than Sterling Holloway, long identified with those comic monologues in colloquial British dialect. “Lion combines twp episodes by author Marriott Edgar about Ramsbottom family, namely “The Lion and Albert” and “The Return of Albert”. Mr. Holloway recorded the narration while doing his stage stint here as the chimney sweep, Dolittle, in “My Fair Lady”. There will be more Ramsbotton cartoons, Mr. Milner reveals, among them being “With ‘er ‘ead Tucked Underneath ‘er Arm” and “The Runnymede Fairy”, with Mr. Holloway again doing the narration”

For more information about Milner-Fenwick and this film, click here. 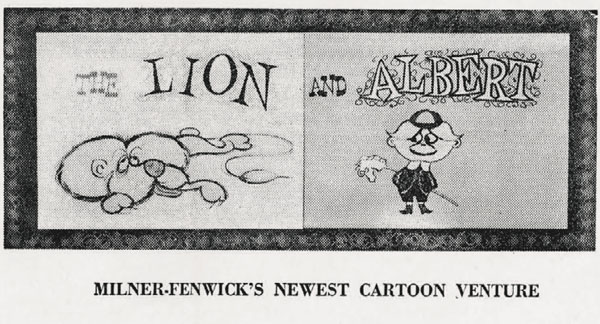 Click image to hear the original Stanley Holloway recording of the poem.

As far as these TV Magoo’s go – this one is rather good. A stupid wolf (Mel Blanc) mistakes Magoo for Red Riding Hood. Magoo in a red graduation cap and gown, en route to his Rutgers college reunion, likewise mistakes the wolf for classmate “Harvey Goober”. Oscar worthy? No. But funny drawings, funny line readings, and perfectly watchable. Not sure I understand the two sets of credits, but both George Atkins and Tony Benedict get story nods.

I actually show this in my animation history classes as a prime example of a Jay Ward Fractured Fairy Tale. It still gets laughs because the prince resembles Walt Disney and the parody of Disneyland and Disney merchandising hasn’t dated at all – in fact its more relevant than ever. Of course Daws Butler, June Foray and Edward Everett Horton are terrific here as well. Educated guess says Pete Burness directed this one. I’m sure the Academy’s Shorts committee gave it a few chuckles – but no nomination.

Submitted under the title “Snidely’s Monster” I’ve deduced that the cartoon screened must have been the Dudley Do-Right episode “Recruiting Campaign” – for obvious reasons. Dudley is charged with recruiting new mounties and evil Snidley Whiplash has just created a monster named “Finster” to infiltrate the Mountie headquarters. Soon enough, Dudley recruits Finster which leads to Whiplash taking over the fort. A fight to the finish between Dudley and Finster resolves everything. Again, I’m sure the Academy appreciated the references to Pearl White, Colin Clive and Sabu – but why was this submitted? There were no rules against submitting television animation at this time, so why not?

Inspired by Bob Godfrey’s The Do-It-Yourself Cartoon Kit (1961), this is as close to actual meta-satire the Tom & Jerry cartoons ever got. Director Deitch and writer Chris Jenkyns (who was also freelancing for Jay Ward at the time) introduce us (via narrator Allen Swift) to the the kit containing all you need for “quiet, sophisticated humor” – including coffee and cigarettes for the animator. The kit doesn’t contain any backgrounds or settings so all the action is set against white space or color cards. The whole thing is sort-of a tour-de-force for animator Vaclav Bedrich (or who ever animated under him). Can you imagine if a Jim Tyer had seven minutes of dialogue free animation of two characters fighting each other against a blank backdrop? If MGM was going to submit one of the Deitch cartoons to the Academy – this was the one to submit. It was probably the best of the bunch (It’s my favorite anyway), because it differed from the norm. Imagine if the producers had submitted Dicky Moe? At least the animators in the Shorts branch probably got a kick out of the first minute or two.

Minding his own business in the jungle, Sidney encounters an Indian “lumber man” who enslaves the naive elephant, forces him to chop trees and carry them to a sluice. Unfortunately everything Sidney does backfires and ends up trampling, crushing or slicing his slave driver. Not the worst Sidney I’ve seen… but nothing to be proud of. The Academy politely rejected this film too.

(Thanks to Libby Wertin, Keith Scott, Mike Kazaleh and Devon Baxter for special contributions to this post) 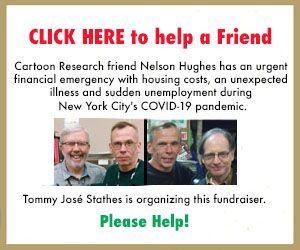