“Bugs Bunny in Storyland”: The Good, The Bad & the Bugs

Our first Spin into Bugs Bunny and Warner Brothers records features a very, very good one and another that might have been better without its earsplitting organ music.

The Capitol Children’s Records series was extremely popular in the postwar period. Some of them were released in a multi-disc follow-along Record Reader format, while others were stand-alone one-disc stories.
Bugs Bunny in Storyland was originally a Record Reader, but the page turning messages were deleted on the LP versions, which also contained additional material to fill out the program (the multi-disc stories only ran about a dozen minutes).

Bugs finds himself on an unfamiliar path that leads to Storyland after being pursued by Elmer (who also narrates). He encounters various Mother Goose and children’s story characters in the usual Capitol format: meet a character or two, exchange a few pleasantries, hear a joke or a little ditty and move on to the next one. Bozo the Clown set the standard as all of his Capitol story records are done in this manner, while those with other characters veer from it occasionally.

This was a time of lavish production values—a full orchestra, excellent sound quality and superb performances which were often recorded at the same time as the music, much like radio shows of the time. There is an energy to these recordings that sometimes seems a bit rushed but never dull or superfluous. Bugs Bunny in Storyland is one of my favorites.

Near the beginning of the recording, Bugs sings two little songs, one a big fan favorite from the cartoon, What’s Up Doc? Which came first, the 1949 record version or the 1950 film one? They’re both quite nice, though the animated version has that great “We really mean it” section and the record does not. Note that Elmer is careful to tell young listeners that he only shoots gumdrops at Bugs so as not to hurt him. 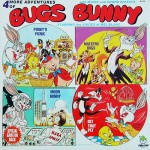 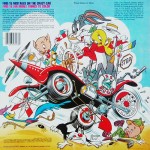 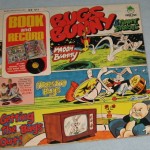 I really wanted The New Adventures of Bugs Bunny album when it came out. How could it miss? Three new stories with Mel Blanc himself! There he was, right on the cover—with copy that clearly reflected knowledge of the master voice actor, even including mention of his accident.

Well, it’s Blanc all right, doing his famous characters with the somewhat older sounding tone we knew from the newer appearances of Bugs and friends in the ‘70s. The scripts are pretty good, even quite funny at times, in a radio show kind of style. Blanc probably recorded his parts in Hollywood. The voices that are pitched are done with the same care as in any other Blanc recording.

But ECCCH! After they paid Mel Blanc, someone must have gone to the McCrory’s on Broad Street in Newark and bought one of those brown and tan plastic electric organs to create the music. You know those organs—the ones made by Emenee or Proll-O-Tone that Aunt Tinkie bought you because she didn’t know what you liked. Lots of children’s records with tiny budgets have organ music, but none of them has ever sounded so cheap. You can hear the organist turning down the little plastic volume knob.

Even good organ music doesn’t fit the Warners characters. During the moments in which the organ doesn’t play, it makes me wish there was no music at all, so at least the albums would be like one of those Kenner film toy records (Blanc’s dialogue sounds very much like it was recorded on quarter-inch tape). It’s a shame that they couldn’t have found the budget to use even some production music, because this LP and its sequel are among the few recordings of Mel Blanc from this period.

The covers for both sides of both albums (and the 7” read-along) are by frequent Peter Pan cover artist George Peed. He has a very distinctive style in which he interprets cartoon characters in his own style: large heads with high foreheads, bulbous noses and beady eyes, easily recognized in his character designs for TV’s The Mighty Hercules, several Disney board games (Monorail Game, Babes in Toyland) and Disneyland Records’ “swirl” album cover for the first DQ-1201 issue of the Snow White and the Seven Dwarfs soundtrack LP.

George Peed was the brother of Disney Legend Bill Peet (who had changed his last name to avoid the constant kidding). Peed worked as a freelancer in New York, doing all manner of art, but his kinetic, busy-as-a-freeway-at-rush-hour Peter Pan record covers were everywhere.

Peed’s Bugs Bunny illustrations are certainly interesting for the characters they include. The back of the first album cover depicts Cool Cat and Merlin the Magic Mouse, though neither appear on the record.

If Peter Pan still has the isolated Blanc tracks, it would be marvelous if these stories were reissued with some proper accompaniment.

The Carrot Kid
Speedy and Pablo, for some reason, are banditos out west. When Bugs comes to town, Sam thinks he’s after the gold. This is the least satisfactory of the eight stories.

What’s Up, MacDoc?
Bugs and Elmer visit Scotland in a story that is quite amusing, but not nearly as funny as the 1948 cartoon, “My Bunny Lies Over the Sea.”

Getting the Bugs Out
Repairman Bugs tries to fix Porky and Petunia’s TV set.

These are the stories on Four More Adventures of Bugs Bunny:

Get That Pet
Granny is angry with Sylvester (and Tweety?) so she gets a new pet—Bugs—and mayhem ensues. This was also issued as a 7” 45 rpm book and record set.

Porky’s Picnic
Since he’s not on the guest list, Bugs invites himself to a picnic with Porky and Petunia. (Trivia note: One of the names on Petunia’s list is “Merlin.”)

Moon Bunny
Bugs is sent into space, but he doesn’t go to Mars to meet Marvin.

Maestro Bugs
Bugs takes over a concert. This production is completely weird since the little plastic organ has to pretend to be a full orchestra (at one point the organist flips on the infamous “bossa nova” switch). This story was included on the Book & Record LP (along with “Getting the Bugs Out” and “Moon Bunny”), perhaps because it’s arguably the best one, but the lack of a genuine orchestra prevents that from happening.

GIVE A LITTLE LISTEN
Excerpt from “Getting the Bugs Out”
This story is very similar to the 1959 Bugs Bunny View-Master story TV Trouble, without the references to Maverick. As for the scratchy sound, buying Peter Pan Records was always a gamble because some sounded fine and some were made of recycled plastic, which would shrink and create hairline scratches that radiated from the center (hold one under a light and you might see an example).