There’s been some discussion of late about a composition called “Frat”, which was written around 1910 by John F. Barth, and shows up in a number of Warner Bros. cartoons over a long period of time. 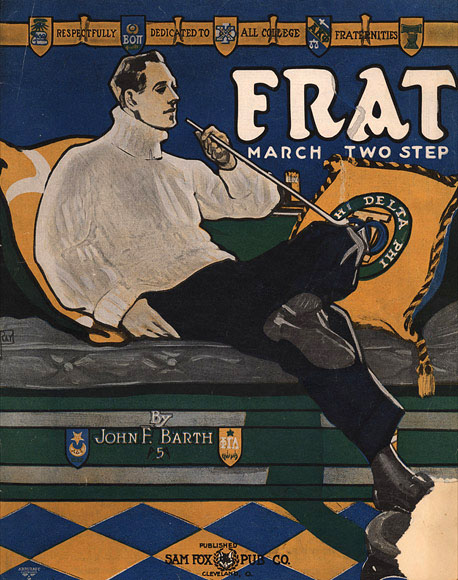 The song is known to various collectors under various titles. Some call it “Three Cheers for Father”, after the lyric that had been set for A Bear For Punishment (1951). To others, it’s known as “Horses Don’t Bet On People“, from a 1945 lyric that was featured by Kay Kyser and his Orchestra. This use may have inspired its use in Early To Bet (1951)– whenever the Gambling Bug bites the unfortunate pussy cat, this is heard on the soundtrack. To others, it is the Eddie Peabody-styled banjo solo from Yankee Doodle Daffy (1943).

Carl Stalling had been an accompanist for silent pictures in a small-city theater. This produced a skill-set that gave him an uncanny idea of finding the right old song for the purpose. And he was known for using old songs in his scores–along with recent songs from Warners’ movies.

As I said, Stalling was fond of using old songs in his cartoons, including (but not limited to), “It Looks Like A Big Night Tonight”,”Cheyenne”, “Be My Little Baby Bumblebee” and others that are probably yet to be discerned. These would be mixed with songs that Warner Bros. owned through the publishing companies they had bought during the heady days of early talking pictures. And there would be other acquisitions — which explains the use of many themes from Raymond Scott compositions that are scattered through like chocolate chips in a toll-house cookie. 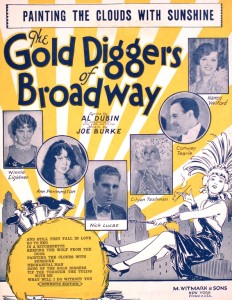 Indeed, a raison d’etre of the entire “Looney Tunes/Merrie Melodies” series was to promote songs from Warners’ films by using them again. This would go on right through to nearly the end of the series. I remember one of the very late WB cartoons, Fiesta Fiasco (1967), that gives Bill Lava’s little combo a chance to throw in “Painting The Clouds With Sunshine” — which was nearly a stretch back of forty years by that time (the last, and only other time that ditty was used was in a cartoon was in the first Looney Tune, Sinkin’ In The Bathtub)!

Scott Bradley at M-G-M and Sammy Timberg at Fleischer had a repository of songs to fall back upon, as both of their major-studio sugar daddies had bought music publishing houses themselves.

On the other hand, Universal, Columbia and RKO did not own music publishers–so they would have to get rights to songs that they might use. Fox may have owned publishers, as there are certainly songs associated with their musical pictures. But Philip Scheib mostly worked under the strictures of cheapskate Paul Terry, and usually had to write his own stuff, or use stuff that was in the public domain.

And then there was Disney, who had to set up their own publishers, especially after “Who’s Afraid of the Big Bad Wolf?” became a national earache in the fall of 1933.

There are connections between cartoons and records, going back to various British covers of “Felix Kept On Walking” back in 1923. 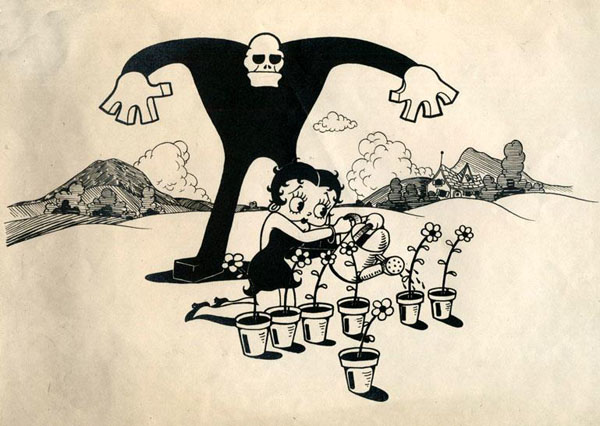 Which brings us to Betty Boop’s Penthouse (1933), a cartoon that does not get run as much or as often as other shorts in the series. And there’s a good reason why.

Some of the humor in this cartoon has not stood the test of time. Gags–including the climactic one–that were acceptable in 1933 have become “politically incorrect” in 2016. 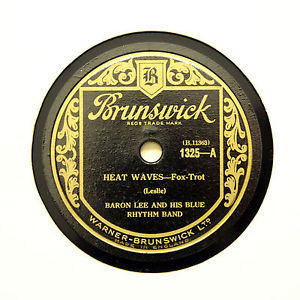 There’s one blackface “Mammy!” gag here–but the “pansy” gags would not go over in today’s social climate.

That being said, this cartoon–like so many of Betty’s shorts–is eminently musical. From the one-shot new lyric to “Mimi” heard over the opening titles, through the adaptation of the standard “Penthouse Serenade” (also known as “When We’re Alone”), there’s so much of the period music that fans find charming–even to this day.

And, it turns out–there’s another “needle-drop”, taking up a goodly part of the cartoon’s soundtrack.

I’d like to think that some–if not all–of the Fleischer Studio employees had gone to see “King Kong”. It was one of the chief topics of conversation at the time.

When this laboratory-constructed Kong (the inadvertent product of a cat playing around the retorts and Bunsen burners), somebody thought of one of the slow, moody near-swing recordings that were coming out. That record was “Heat Waves'” by Baron Lee and the Blue Rhythm Band.

Baron Lee was primarily a dancer–he is not known to have sung or played anything. But he was good at “fronting” what was, in effect, the third-string orchestra of the Irving Mills stable.

Third-string it may have been–but that’s only in comparison to the elegance of Duke Ellington, and the sheer personality of Cab Calloway. (Those were Irving Mills’ first- and second-string units, mind you.)

A booker who got this band, instead of the Ellington or Calloway groups, got a good orchestra, which could play anything put in front of it, and could get the dancers to doing their thing–whether it was on a dance-floor or in a chorus line.

“Heat Waves” (not to be confused with Irving Berlin’s 1933 tune “Heat Wave”), is set at a slow tempo, but it’s not a romantic piece–not by a long shot! And it fits the Fleischer animation of the looming monster like a well-tailored glove.

Once Betty squirts the monster with whatever shes using in her Flit gun, we go from the Blue Rhythm Band an hot Harlem rhythm to the studio orchestra, and Mendelsohn’s “Spring Song–which was already being used as a musical cue for effeminacy, if not outright homosexuality.