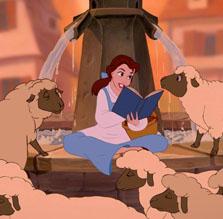 Linda Woolverton. In the Boston Sunday Globe February 9, 1992, writer Linda Woolverton talked about her work on Disney’s Beauty and the Beast (1991). She stated, “In the past what we’ve seen is that other animated heroines were reacting to outside forces with their fate in the hands of men. Belle isn’t like that. She initiates action. She sets things in motion. What is great about her, I think, is that she shows us all that women don’t have to sit around and wait.

“I saw Belle as 18 and liberated as a human, not just a woman because she was eccentric. She loves to read, for example, and clearly she’s off the beaten track in this medieval village where women just don’t do that.

“I have made a point of asking mothers if the movie is too intense for their little kids and the thing I always hear is ‘no’. I’ve seen eight year olds sit through the scene with the attack wolves and not even flinch. Sure the Beast is scary initially. He’s supposed to be because he is, after all, a beast. But we present is back story early on so you understand his actions. If there is any controversy over a supposed violence level, I don’t understand that at all.”

The Wisdom of Chuck Jones. From Newsweek October 21, 1985, animator and producer Chuck Jones said, “It never occurred to us (at Warner Bros) that we shouldn’t be ignored. I always have ideas for films. I still have ideas for Warner Bros cartoons. I never had to learn how to do Daffy, the Coyote and the other characters. They’re all inside of me. With Warner Bros. cartoons, you can take the sound away and know what’s happening. With Saturday morning television cartoons, you can turn off the picture and still tell what’s happening.”

Owning a Warners Cartoon. In the Orange County Register October 22, 1989, animator and producer Chuck Jones said, “The Warners really didn’t understand the nature or value of cartoons. In fact, in 1948 the studio sold off all their pre-1948 cartoons for $3,000 apiece. Boy, I would like to own just one of those cartoons today. None of us felt deprived because nobody owned their own cartoons. The studio owned everything.” 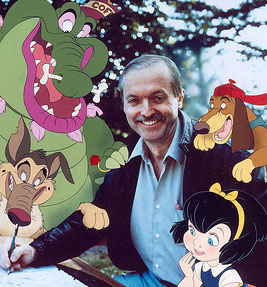 Bluth Sequels. In the L.A. Daily News April 2, 1992, animator and producer Don Bluth talked about sequels to animated films he had originally worked on but didn’t do the sequel. Rescuers Down Under (1990) was brilliant technically but they could’ve worked on the story more. An American Tail: Fievel Goes West (1991)? I was disappointed. I wished it had been a better picture because I like that little character. We declined to help make that picture because the business deal wasn’t such that it helped our company.

“Running a company has been difficult for me. You’re trying to protect all those people who have given their lives to making that product happen, so you have to do what’s good for them. I wish we had been involved, because maybe we could’ve helped that film a little more.

“Of course, I was angry at first. Then I thought, how unfair to be so small, to let someone roll over the top of you and feel you can’t do anything about it. And a little voice inside me said, ‘Welcome to the big world, Don’. So I felt angry, then I got rid of it. I still call Steven when I go back to town.”

The Disney Connection. In the live action Touchstone film, Ruthless People (1986), Judge Reinhold and Helen Slater wear duck-face masks to kidnap Bette Midler and she comments about being abducted by Huey and Dewey. Later, Danny DeVito is so happy about his shrewish wife’s apparent demise, he sings “Zip-a-Dee Doo Dah”.

Reboot South Park? In Entertainment Weekly October 14, 2016, South Park creator Trey Parker said, “We’ll sit here for two hours talking about an idea. I’ll be like, ‘This really sounds familiar’. And you find out we did that eight or thirteen years ago.”

Creator Matt Stone added, “What we should have done is quit the show after Season Five. Then we could have done a reboot. That’s what everyone else is doing. We can’t even reboot ourselves because we never went away.”

Burny Mattinson. In the October 1986 issue of American Cinematrographer magazine, director Burny Mattinson talked about Disney’s The Great Mouse Detective (1986): “This runs the risk of sounding corny but animation is a team effort. There really hasn’t been much change from the way Walt (Disney) set it up originally. If you take The Black Cauldron (1985) as one extreme on the pendulum as far as taking all the time we needed and spending all the money they felt they needed, we’re now swinging back the other way. (The Great Mouse Detective’s budget was twelve million compared to the thirty-five million for The Black Cauldron.)

“Animation is 75% thinking and 25% drawing. Everything must be carefully thought out first. Our animators not only have to think like actors but have to figure out how to get that performance across on paper and on screen. The important thing to remember about good animation is that less is more. Moving your characters too much is the sign of a real amateur. We put our efforts into more confined, carefully thought out actions that communicate the point clearly and succinctly.”

Lou Scheimer. In the Daily News, February 3, 1985, producer Lou Scheimer talked about his announcement that his studio was committed to making thirteen animated features over the next five years and said, “You won’t see any dewdrops glistening on cobwebs but I’m not sure that kind of effect really helps to tell a story. What I think is important is that these films will be done in the U.S. So much work has been going out of the country that’s it’s become mpossible to train young people to do full animation.

“Although cable, cassettes, syndication and foreign distribution are important markets for animation individually, no one of them represents enough revenue to support feature production. But together they offer a substantial market.”

Gracie Lantz. In the Los Angeles Times for March 19, 1992, “When the (Walter) Lantzes appeared together at schools, on talk shows or to receive awards, Mrs. Lantz, of course, would be asked to do the Woody Woodpecker laugh. She would oblige and her husband would shake his head: ‘No dignity’ he would say to no one in particular. ‘She used to be very proper’.”