Lee Morehouse. In the internal Disney Studio newsletter, The Bulletin Vol. 1, No. 22, March 21, 1939 is a brief biography of animator Lee Morehouse. 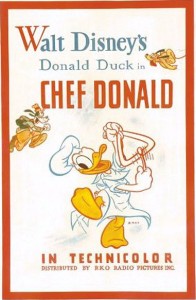 “Lee Morehouse was born in Garvanza, California, which now is merely a province of South Pasadena. Lee has three sisters, one of which he is only ten minutes older than, because she is his twin.

“Lee’s artistic past began at the tender age of eight, when he drew the most magnificent airplanes and boats. At 12, he was copying Jiggs and Maggie, and at fifteen his first original cartoon was published in the high school paper.

“After this ambitious start in life, Lee went to U.S.C.

“The carefree days in college being over, Lee spent a whole summer hunting a job in Catalina.

“Lee says that he has known Fred Moore for nigh onto 12 years, and that he used to collaborate with Fred on comic strips for the Junior Times. In fact, Lee says ‘I knew Fred when he wrapped toilet paper for Ralph’s (supermarket) at ten bucks a week’.

“Fred had been at Disney’s about three years when he suggested to Lee that perhaps there might be a spot for the Morehouse talent. So in came Lee with samples and now he’s an animator in the annex. He’s got a three months old animator at home.”

Morehouse was born July 18, 1911 and passed away October 7, 1997 (age of 86) Morehouse’s Disney animation credits include the following:

1948: A story credit for Inferior Decorator along with Bob Moore

Just One. While doing the Rocky and Bullwinkle series, actor Bill Conrad who was just doing the voice of the narrator on the show grumbled to Jay Ward and Bill Scott that he could do more than one voice. So Scott wrote a script with a couple of incidental characters like a gangster and the next time Conrad showed up to record, he saw he had three other minor parts besides the narration. When it came time to record the voice of the gangster, Conrad eagerly performed and everyone at the recording session looked at each other. It sounded exactly the same as the voice of the narrator. There was a pause and then voice artist Paul Frees popped in with “Bill Conrad, master of a thousand voice.”

Pascal on Animation. In 2006 with the release of Columbia Pictures’ motion capture animated film Monster House, Columbia Pictures Chairman Amy Pascal told the media: “Unlike a lot of other movie genres, animation speaks a universal language. The stories are simple and classic and in a funny way you can suspend disbelief in these stories in a way you can’t in ‘Miami Vice’. These movies also speak the visceral language of our age. Nobody believes long drawn-out arguments anymore, so animation feels especially vital in the way that an editorial cartoon can cut to the truth more effectively than a fifteen page news story.” 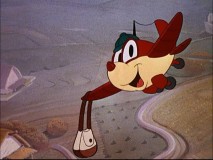 The Mail Must Get Through. In Saludos Amigos (1943), little plane Pedro battles against storms and the terrors of the real South American mountain, Arconcagua and disappears. Almost magically, Pedro reappears and makes a sputtering upside-down landing to become a hero. In the precious mail satchel is only one postcard reading “Having wonderful time, wish you were here,” a cliched greeting sent by friends on vacation. The narrator (Fred Shields), adds: “Well, it might have been important.”

The postcard was addressed to “Jorge Delano,” the cartoonist who was the Santiago guide for Walt and his artists on their South American trip. The postcard is from “Juan Carlos,” who hosted a party in Mendoza for Walt’s group before their flight to Santiago, Chile. 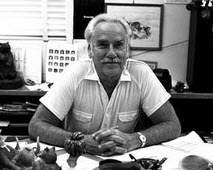 The Stevens Painting. Disney Legend Ward Kimball had seen a cartoony painting done by Art Stevens of wacky creatures in the early 1950s that was exhibited at a Disney art show and then asked Stevens to become part of his unit. Stevens said that actor James Mason (who was filming 20,000 Leagues Under the Sea at the Disney studio) was interested in obtaining the painting but not for money.

He offered to trade Stevens for some of his own sketches but Stevens refused. Stevens always said that Ward was the most interesting person he’d ever known in his entire life, although he was not always flattering in his memories of Ward. Stevens animated most of the “strings” section in Toot, Whistle, Plunk and Boom and the talking statue heads in Mars and Beyond but had a rich career as both a Disney animator and later co-director on The Rescuers (1977) and The Fox and the Hound (1981).

The Map To Atlantis. Disney’s animated feature Atlantis: The Lost Empire (2001) may not have made a big splash but many people put in long hours to recreate that legendary culture. Marc Okrand, who developed Vulcan, Romulan and Klingon languages for the original Star Trek movie series, developed a language for Atlantis. The written language was developed by John Emerson. “The Atlantean [A] is a shape developed by John Emerson. It is a miniature map of the city of Atlantis (i.e., the outside of the swirl is the cave, the inside shape is the silhouette of the city, and the dot is the location of the crystal). It’s a treasure map,” stated co-director Kirk Wise.

The Human Cars. Stop, Look and Listen (1967) was a color ten minute live action short made by Len Janson and Chuck Menville using pixilation (a form of stop-motion animation). It was nominated in 1968 for an Academy Award.

The film contrasts the driving style of two drivers, who don’t have cars but use their own bodies like a car including leaving skid marks and a trail of transmission parts. The principal camera man was animator Dave Brain and it was primarily filmed in Griffith Park.

There is a scrolling list where the producers thank a long list of auto safety organizations, ending with, “…without whose contribution this film was made.”

Brain remembered, “Walt Disney himself saw our ‘dailies’ and authorized his editors to let us cut sounds from the Disney Studio library into our sound track. This was a month or two before Walt died and after he did, the studio passed on distributing the film. Len Janson got Chuck Jones to screen the film and he pitched it to MGM who bought and distributed it.”