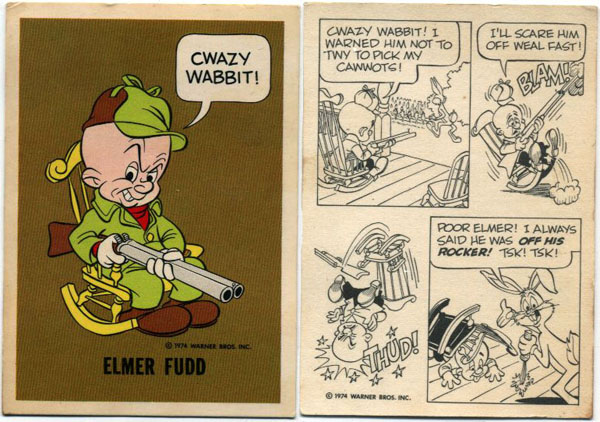 Doesn’t Anyone Want Credit for Elmer Fudd? It is tough to research animation history but back when I first started it was even worse. Just take a look at articles that appeared in magazines in just the year 1971. In “Funnyworld” #12, Bob Clampett talks about how he created Bugs Bunny. That same year in the magazine “Take One Vol. 2, No. 9” Tex Avery tells how he created Bugs Bunny. In the December 19th edition of the “Los Angeles Times”, Chuck Jones said he created Bugs Bunny. That same year, an advertisement for a cartooning course identified Bugs Hardaway as the creator of Bugs Bunny. However, in Cecil Smith’s television column, he writes that Friz Freleng is the creator of Bugs Bunny…as well as Sylvester, Tweety, Porky Pig and the Road Runner!

Mickey Vs. Donald. “I did the opening (animation) for The Mickey Mouse Club show with Mickey playing the piano and where’s he’s in a straw hat and cane. I liked doing Mickey because he was more like Walt. He’d win his battle using his head and his wits, while the duck would just get mad and throw things. Mickey was more intelligent. We always thought Mickey was Walt’s alter ego.” Ollie Johnston in an interview at a local Los Angeles art gallery in 1995.

Don’t Lean on Me. “You see, when I was growing up, animation was dead. What I was trying to do was create a new form strictly on a personal level based on who I was and my experience, and that’s unheard of in animation. Heavy Traffic (1973) and Coonskin (1975), for instance, don’t lean on Clampett or Avery or Jones or Disney. They lean on Ralph Bakshi. One of the things we’re getting a lot of today is very slick imitators. You know, guys who look at Clampett and Avery and say, ‘Hey, I’d like to do that’,” animator and director Ralph Bakshi told Mike Ventrella in 1988.

Bambi’s Mother. Selby Kelly, the widow of cartoonist Walt Kelly, was working in ink and paint department when Bambi (1942) was released. She claimed that a scene of Bambi’s mother being shot by hunters and hit by their bullet was actually animated, painted and filmed. She said she knew this because she painted some cels on that scene.

SuperToons. When Filmation did The New Adventures of Superman as a Saturday morning cartoon series in 1966, it hired writers who had worked on the Superman comic books, including Arnold Drake, Bob Haney, George Kashdan, Leo Dorfman, Bill Finger and William Woolfolk. The use of people from DC comics probably accounts for the fact that so many of the comic book stories were adapted for the Filmation cartoons. For instance “Superboy—The Super Clown of Smallville” is an adaptation of “The Super Clown of Metropolis” from “Superman” #136 (April 1960). Interestingly, in the Filmation cartoons there is a copyboy at the “Daily Planet” newspaper named “Beany”. No, this wasn’t an homage to Bob Clampett. Beany was a character who appeared in the old Superman radio series as a copyboy.

Hanna-Barbera Adult Cartoon. “When you say the word ‘cartoon’, people think of children only, and we limit ourselves although plenty of adults watch cartoons. We think combining the live action with the animation will give our company a special identification,” stated animation legend Joe Barbera in an interview referring to the upcoming H-B Saturday morning television series The New Adventures of Huck Finn (1968).

Hacking Pixar. In 1998, Pixar Animation Studios, filed a law suit over an anonymous e-mail message that accurately named some 400 Pixar employees’ names, positions, and respective salaries. The e-mail was sent via computer in early February under the name of Pixar CEO Steve Jobs, who denied sending it. Pixar was concerned that the message could have a negative effect on employee relations and recruiting efforts.

Firehouse Five Plus Two. Disney Legend Ward Kimball used the following gag when I interviewed him but perhaps the first time he used it was March 18, 1954 when he was a guest contestant on the comedic television quiz show You Bet Your Life hosted by Groucho Marx. Marx asked him why Kimball named his Dixieland jazz band The Firehouse Five Plus Two? Ward responded, “Because there are seven of us.”

Miyazaki’s Pippi Longstocking. Back in 1971, legendary animators Hayao Miyazaki and Isao Takahata began production on an animated adaptation of Astrid Lindgren’s Pippi Longstocking books. After meeting with the animators, Lindgren ultimately decided not to give them permission to produce the film. You can see a lot of these designs in Panda Kopanda (1972), made right after the Pippi project was abandoned, as Miyazaki and Tahahata reused what was on their desk at that moment. Mimiko is basically Pippi. 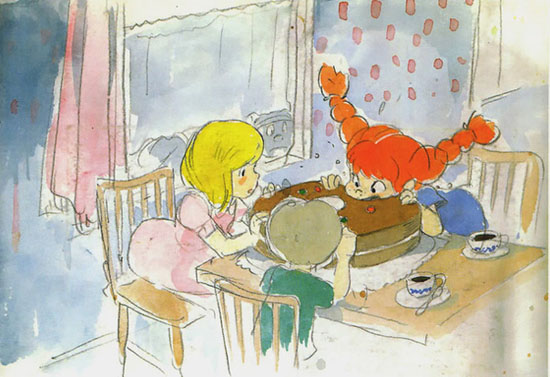 Peter Puck Revisited. Hanna-Barbera created an animated character named Peter Puck in 1973 for NBC to use to explain hockey in little segments of the NHL Game of the Week. Later, broadcaster Brian McFarlane (the son of “Franklin Dixon” author of the Hardy Boys stories) got the rights to use the character in Canada and then later worldwide. The original voice was Mickey Dolenz who was then replaced by Ronnie Schell.

Ronnie Schell, voice of Peter Puck remembered, “I think it was on for four years wasn’t it? I can still do the voice and get up in the register and say, “Love that hockey!” How I got that was – I was doing a whole bunch of stuff like Wait Til Your Father Gets Home (1972) over at Hanna-Barbera Studios. A producer came to me and said, ‘Would you like to do Peter Puck?’ I said, ‘Well, what is it?’ He said, ‘It’s a little puck that explains hockey.’

“It was originally NBC’s idea because they wanted to explain hockey to Americans. Well, the secret is that I didn’t [know anything about hockey] either! As I got the scripts, I learned about hockey. The problem was for four years I would go on shows and they would interview me. ‘So, you’re Peter Puck! How about those Kings, hey? Aren’t they great?’ ‘Um, yes.’ ‘What do you think of the way the left winger…’ I was at a total loss for years … I was totally in the dark … whenever I did a radio show they thought I was an expert on ice hockey. They’d ask me these detailed questions and I would not know a thing of what I was talking about.”