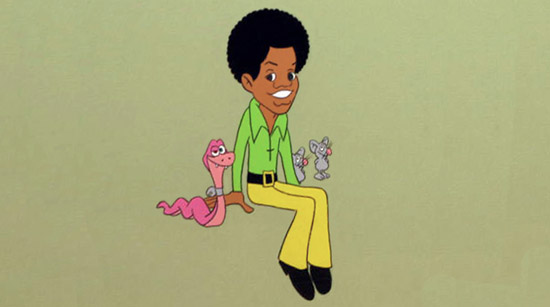 Michael Jackson: Take One. Back in 1971, one of the series on Saturday morning television was the “Jackson Five” which featured animated versions of Michael Jackson and his singing brothers. “Creem” magazine ran an article on the series showing model sheets done by “MAD” magazine artist Jack Davis. The magazine described the show in the following way: “In the series, Michael is generally into mischief just like in real life, often accompanied by his friend, Rosie the Snake.” (In the series, Michael also had two mice named “Ray” and “Charles”.) Record producer Berry Gordy also appeared in animated form in the series with his voice provided by the legendary Paul Frees.

Michael Jackson: Take Two. According to Judge Hugo Alvarez who married Michael Jackson and Lisa Marie Presley in a secret ceremony in the Dominican Republic, “It was one of the weirdest weddings I’ve ever performed. Michael showed more enthusiasm for my tie than for his wedding! I was wearing a tie featuring Fred Flintstone playing golf that I had bought at Universal Studios in Florida. Michael told me, ‘It’s a great tie! I love Fred Flintstone!’ But I never heard him say he loved Lisa Marie.”

Another Flintstone Fan. Actor Rob Lowe was also a rabid The Flintstones fan. In 1987, to prove her love for him, his then girlfriend actress Melissa Gilbert gave Lowe a present of fifty pieces of animation art from the show.

Toon Pride. Back in the 1980s, lovely “Wheel of Fortune” hostess Vanna White was a guest on “Late Night with David Letterman” and admitted she was such a big fan of the animated The Flintstones that she had seen each episode at least five times. “You say that as if you were proud of it,” laughed Letterman. “I am,” firmly replied Vanna.

Bakshi and Blade Runner. One of the things that I love about Ralph Bakshi is all the different projects he announced with hyperbole and enthusiasm over the decades but never developed further than the initial announcement. In 1987, Bakshi negotiated with comedian Richard Pryor for two films to be directed and co-written by Bakshi and starring Pryor. One would be a live action film while the other was to be a combination of live action and animation. At the same time, he was planning on producing an animated version of Ridley Scott’s “Blade Runner” for television. In 1981, Bakshi had announced his next animated feature would be “Crime” from Richard Hammer’s book “Crime in America” followed by an animated version of “The Canterbury Tales”. None of these films were ever made.

Food of the Future. One time in the early days of the Disney Studio, Walt joined his employees at lunch and pulled out a bottle of pills and swallowed a few. “This is the food of the future. Each pill is a meal in itself,” boasted Walt. Then he sat down and proceeded to order a regular lunch like the rest of the animators.

Artoo-Detoo in Love. The forty-eight minute animated television special The Great Heep (1986) was a follow-up to the animated “Droids” Saturday morning television series. It was written by Star Wars’ sound effects wizard Ben Burtt who gave Artoo-Detoo a girlfriend named KT-10 (Katie, get it?). Her creation was inspired by the rebel pilot briefing in the live action film A New Hope (1977) where another droid whistled at Artoo. In the original script, KT-10 is killed but George Lucas stepped in. “He came to me and said, ‘You can’t kill KT-10. She’s such a good figure. Can’t you find a way not to destroy her?’ He was right. Having her live was much better,” said Burtt in a 1987 interview. By the way, the special was originally supposed to air December 13, 1985 on ABC as part of the holiday season but was delayed until June 7,1986, right after the series was cancelled. An estimated $500,000 was spent on the special.

Run, Bambi, Run. America’s hunters have always felt they were given a bad rap by Disney’s animated feature, Bambi (1942) as the killers of Bambi’s mother and the ones who started the fire that destroyed the forest. In a 1942 edition of the magazine “Outdoor Life”, editor Raymond Brown denounced the film as “the worst insult ever offered in any form to American sportsmen”. An adult Bambi and his friends became the spokes-animals for the “Only You Can Prevent Forest Fires” campaign before the introduction of Smokey the Bear.

A Foray Voice. In December 1995, voice actress June Foray announced that she had started writing her autobiography and had completed almost four chapters. (With help from Mark Evanier and Earl Kress, it came out in July 2009 from Bear Manor Media). She also told the interviewer that voice over work had changed since she first started doing it in 1950. “Sometimes the network likes a voice and that voice isn’t particularly talented, but that’s the voice that gets the job. Things are altogether different than they used to be. It was easygoing and the directors of the shorts that we did like a Chuck Jones or a Friz Freleng or a Tex Avery, they didn’t have voice directors like everyone has now. Chuck would do it himself. I’d read a line and he’d say, ‘Okay, that’s fine’. So it was fun, not much pressure and not so much like work.”

Book Hunt. In a 1987 interview, animation storyman Bill Danch claimed that he wrote a book on animation with Dave Fleischer and that Fleischer took full credit for it. He was not confusing it with the book written by Max Fleischer, Noah’s Shoes (1944, S.J. Bloch Publishing). I have searched for any further information on this book for over two decades but then again, I have also searched for storyman Roy “Big Mooseketeer” Williams self-published autobiography that I know exists. His estranged daughter confirmed that her mother had a copy but didn’t know where it was and apparently a copy was in the Disney Feature Animation Florida library before it became extinct. Anyone reading this know anything about these two lost books?

What’s In A Name? According to Steven Spielberg’s mother, Leah Adler, her son called her one day and asked ‘What was Dada’s (her father) Jewish name?’ She replied, ‘Fievel’ and then didn’t hear anymore about it until An American Tail (1986) came out with a little Jewish mouse named Fievel.

MEET JIM KORKIS: Besides several appearances in the Orlando area this summer, Jim will be at the Dayton, Ohio “Plane Crazy” chapter of the Disneyana Fan Club Show and Sale on June 29th and 30th. It’s open to the general public and besides speaking, he will be selling and signing copies of his books. Here is the link.

Then the Southeast Michigan Chapter of the Disneyana Fan Club has him at the Redford Theater movie palace on July 12th and 13th. Jim will be doing a half hour presentation before a screening of the Disney live action feature Mary Poppins about the secrets behind the film and then a question and answer session afterwards where again he will be selling and signing his books.