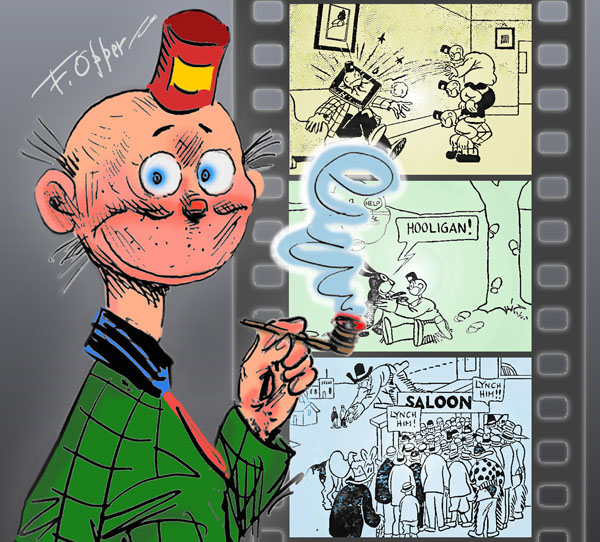 One thing that surprised me during my investigation of the animated adventures of Happy Hooligan, for my latest Cartoon Research book, was that the character wasn’t just famous – he was incredibly popular. I distinguish the two identifiers. Something can be “famous” without being “popular.” The tramp with the empty tomato can on his head was extremely popular.

Created by veteran cartoonist Frederick Burlingame Opper, the hobo who shied away from all manual labor made his debut in Hearst newspapers on March 11th, 1900. Opper, who had been a professional illustrator for over two decades before William Randolph Hearst hired him in 1899, was the original multi-media exploiter.

Opper brought Happy to Vitagraph Studios for the production of live-action, comedy shorts the same year his comic strip debuted. The first film appeared that fall. Twenty-three were produced through 1903.

Happy Hooligan merchandise flooded the market. Before the term “action figure” was coined, Happy Hooligan was one, in 1906. The tramp took to the stage, also, touring vaudeville under the direction of producer Gus Hill.

There is little doubt that the cartoons were a big hit when you read reviews and theater patron comments. This was due to International’s high-quality, animation standards and comedic cleverness of the stories. Hearst hired the best, and the material reflects that.

However, a political and financial mess lurked behind the cartoons, as well as a hostile workplace, due to the relentless production pace. IFS animator Bert Green stated in a May 1919 interview, “It’s no use making any engagements while in this business, as you might as well be serving a sentence in Joliet.” 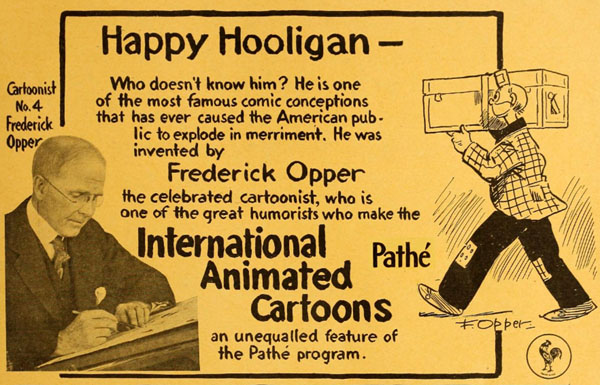 On July 6th, 1918, the IFS animation studio experienced a complete meltdown. It was called “Black Monday.” They laid off their entire staff due to financial difficulties. There were two main causes: Hearst’s pro-Germany, anti-war/anti-British position in the newspapers when the war broke out and the Spanish flu.

The influenza pandemic waves were a big hit to IFS. It’s difficult to go to a theater when they are closed due to health hazard, or lack of patrons, or when the government is urging folks “to stay home.” 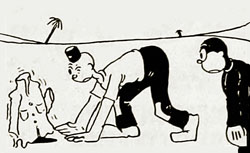 Also, Educational Films Corporation of America had stopped distributing Hearst’s cartoons even before IFS had closed its doors. Vanished was the inroad to theaters.

“Up to the time of the outbreak of the Spanish influenza, we had been distributing International’s animated cartoons with great success,” EFC president, Earle W. Hammons, said in an interview. “But when the situation reached a critical stage, Educational ceased releasing these cartoons, and subsequently the International Film Service stopped making them.”

IFS general manager, Carl E. Zittel, conveyed that the studio was, “thoroughly demoralized by the influenza [pandemic] and the demands for military service.”

The state of New York suffered 41,000 deaths due to influenza between 1918-20. The number of the sick that survived was astronomical.

The politics of Hearst, the spread of influenza, the suspension of distribution, and the disruption of wartime created the perfect storm for the failure of IFS. Hearst had to downsize, and IFS was among his least profitable ventures. 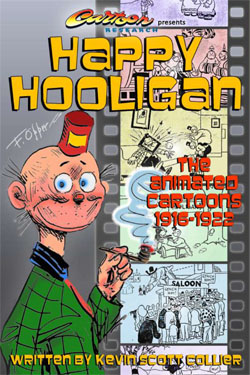 By the end of 1918 he was steadily rebuilding the studio. It was up and running, and releasing cartoons again, by March 1919. Educational returned as its distributor, but not for long.

In the fall of 1919, Hearst leased the IFS comic strip based cartoon titles to Goldwyn-Bray. In short order, distributor Goldwyn bought controlling interest in Bray Pictures, essentially owning the company John R. Bray had built. But Hearst hadn’t revealed his cartoons were becoming unprofitable when signing the lease, so only months into the agreement Bray owed IFS over $41,000.

Perfect storm number two unfolded. The result: there were breaches of contract and lease, and also non-payment of earnings. Lawsuits flew back and forth. Employees sued both sides, as well.

In the center of the storms was Happy Hooligan. Goldwyn-Bray, with product coming out of the IFS studio, released their first Hooligan cartoon on April 17th, 1920. Leading into the following year, the quality of the animated shorts diminished. By the time the final “Bray” Hooligan cartoon was released on April 23, 1922, folks had lost interest in the tramp topped with an empty tomato can.

As many as 55 Happy Hooligan cartoons were released over five and a half years. While only a few of the cartoons exist today to enjoy, there can be little doubt – the series was wildly popular. Hopefully, more films will be uncovered. I hope you’ll check out my new book for much, much more information.